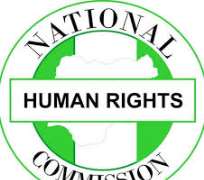 The National Human Rights Commission (NHRC) has said bullets were fired at its premises on Monday.

It urged the Inspector-General of Police, Mohammed Adamu, to fish out those behind the shooting.

NAN reports that the Executive Secretary of the NHRC, Tony Ojukwu, made the call when he took journalists round the building.

He also asked the Attorney-General and Minister of Justice, Abubakar Malami, to intervene.

“Some shots were fired at the commission around noon. As you can see, these are the bullet holes on the building and damaged cars

“The police supposedly tear-gassed members of the banned Islamic Movement of Nigeria (IMN) who were protesting on the Aguiyi Ironsi street where the head office of the NHRC is located.”

Ojukwu noted government agencies along the street might have felt the effect of the teargas but none reported live bullet shots into their compounds as in the case of NHRC.

He further requested that the commission be adequately protected henceforth.

“The commission requests that there must be accountability for these attacks. It is because the earlier attacks were not punished that this reoccurrence has happened”, Ojukwu added.