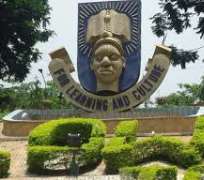 In compliance with the directives from the Federal Government, as announced by the Honourable Minister of Education, Alhaji Adamu Adamu, that all Federal Universities be shut down in order to curtail the spread of Corona Virus in Nigeria, the authorities of the Obafemi Awolowo University, Ile Ife, have announced the closure of the University until further notice.

Accordingly, students are expected to be leaving their hostels and the campus beginning from Monday, 23rd March, 2020, latest by 5:00pm.

In view of this, parents and guardians of our students are advised to ensure that their children and wards comply fully with the order.

In addition, the Vice Chancellor, Professor Eyitope Ogunbodede, has announced the suspension of all local, national and international conferences, seminars or workshops, scheduled to hold in the University, until further notice.

He implored the organisers of such programmes to bear with the University Management and join hands with it to have a healthy and safe environment.