How reasonable is the bill to ban generator sell and jail users in Nigeria? 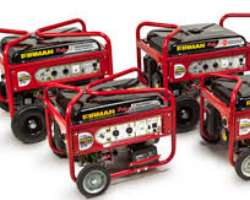 • Senator Enagi may have plans of going into solar importation directly or by proxy, hence his request to ban generator use

. Senator Enagi, Sir, propose a bill that will make it compulsory to probe the power sector and audit NNPC

. Propose a bill that will stop ex-governors who are senators from getting all rights as ex governors and still get salaries as senators

The news of the proposed bill by Senator Bima Muhammadu Enagi of All Progressive Congress (APC) Niger South last week to ban the sell and the use of generators in Nigeria was a shock that got many Nigerians really upset. He added in his proposed bill that sellers and users should be jailed not less than 10 years. According to the Senator’s explanation of the narrow proposed bill, if the it is passed, it will help to curtail the menace of environmental pollution and help facilitate the improvement of the power sector. I am speechless.

Is Senator Enagi not aware that the generator business flourishing is as a result of the government’s failure to provide electricity for the people? Government should play her role well by providing steady power supply for us and we will see who will be interested in generators. Anyway, while I will thank the senator for thinking about the environment, it is equally obligatory to let him know like many Nigerians that I was highly very disappointed at his proposed bill and see his bill as very dishonest, provocative, shallow and laughable. The bill is not different from the suppressive bill of “hate speech” equally proposed by his counterpart also from Niger State. I appeal to other senators, all well meaning Nigerians and our pressmen to help so that the socket of the life support of this bill that is still in incubator could be collectively plugged out immediately and now for it to die quickly.

I can vividly remember that when Buhari and APC were campaigning in 2014 prior to the 2015 election, Babatunde Fashola had been widely quoted to have said that any responsible government would fix Nigeria’s electricity problem within six months, and that the best thing to do would be to vote out Peoples Democratic Party (PDP) under the then president, Goodluck Jonathan. APC, President Buhari and Fashola are today still in power and over five years have gone since they came to power, what happened to their promises? Why do Nigerians still experience epileptic power supply after billions of dollars spent in that sector, and even in some areas they do not get light for months but would still be exploitatively asked to pay electric bills – for light they never saw and used? Why? Though in 2018 it was equally reported that Fashola denied ever making the statement attributed to him and challenged all to prove him wrong with evidence. But why did he not deny the statement in 2014 but waited till 2018 when the campaign of the next election was close?

This same government was also reported to have promised to equal naira to one dollar. Why does exchange rate of a dollar today fluctuates between 350 and 400 naira? Meanwhile when they made the electoral promise naira was exchanged then between 180, 190 and 200 to one dollar. At least this very promise has not been denied. The people of this same government promised security for Nigerians and to end Boko Haram. Have they defeated Boko Haram? Are we all secured? What are they telling us about their promises? It is on record that in the history of this country that the lives of Nigerians have never been massacred like it is witnessed on daily basis today - in exception of the time of the Nigerian Biafra war. It is an equally known fact that this very government is clueless on how to tackle Boko Haram, acts confused, full of propaganda and lies.

President Buhari told us before he was elected in 2015 that fuel subsidy was a fraud. But in 2019 according to PricewaterhouseCoopers (PwC), a reputable accounting firm, Buhari’s government spent over N2.3 trillion in subsidies in three years - N1.12 trillion and N1. 2 trillion on electricity and fuel subsides respectively - and the government has again budgeted N450 billion for petroleum subsidy in 2020.

The essence of the above references on the government’s promises and failures is to inform Senator Enagi that his proposal was a misplaced priority and that he misfired. Hypocrites perhaps surround him as that is the normal case with many Nigerian politicians, thus he may not know that this very federal government of today is a big failure.

Obasanjo’s government was accused by many - that included President Buhari - of spending $16 billion dollars in electricity without giving Nigerians light, whether that was true or not I don’t know. Consequently Senator Enagi, Sir, please kindly propose a bill that will make it compulsory for private auditors and investigators to be constituted and be allowed to investigate all monies mapped out for electricity projects under President Buhari’s government and beyond and how they were used. Because genuine Nigerians would be very happy to know why all these years of spending billions of dollars in the power sector that Nigerians are still without constant electricity like it is in Ghana. Again Senator Enagi, Sir, propose a bill that should contract private auditors to audit the account of NNPC and allow independent investigators to investigate why our refineries cannot be repaired and new one cannot be built. We want to know those sabotaging the efforts of the government. Are those people invisible? Why can’t Nigeria build refineries, and why have we spent trillions in oil subsidy? Some people close to those in authority are feeding fat at the expense of our collective pains and misfortune. Nigeria is really terrible.

In a country where successive governments continued to fail in the midst of plenty to provide basic amenities - health/social care, electricity, motorable roads, drinkable water and qualitative education – failed to pay senior citizens their pension rights and workers their salaries as when due, sometimes they are even owed up to four, six or eight months, how fair is it that ex-governors get their own entitlements and at the same time receive salaries as senators? Therefore Senator Enagi, Sir, please don’t forget to include in your new proposal a bill that will stop the rape and the cruel injustice against Nigerians. Let there be a bill that will henceforth stop ex-governors from getting pensions money, allocation of houses, changing or buying of new cars, health and house maintenance allowances all from government and still receive millions of naira salaries and other incentives as senators. Let the law be that an ex-governor who contested an election as a senator and won seizes immediately to receive the benefits that go with a former governor at the time he/she is sworn in as a senator.

Nigerians are brutally raped continuously by the political class and we the ordinary Nigerians are in pains. But for how long shall the same ordinary Nigerians continue to stupidly defend and support evil against themselves because of political affiliations, ethnic/religious backgrounds or myopic selfish interests? When will they know that a good road does not recognize whether the plier is an APC or PDP etc. or even an apolitical person?

Senator Enagi, Sir, you are trying to dump the failure of the government with your proposal on the doorsteps of ordinary Nigerians because you feel that we can’t do anything. You know that when you make the right bill proposal that will end the hostage we are in in the power sector that it will definitely not go through but the cabals who have gripped Nigeria in jugular and if you pressure to make it to come through that it will not go down well with the hijackers of the sector (the big head criminals) who will surely come after you. You are consciously aware of this, and as such you are scared and proposed a bill that was not for the best interest of Nigerians.

In consideration of Nigerians’ intuitive way of lives, my instinct tells me that this bill was not sincerely conceived, and it could not be completely wrong to suspect that Senator Enagi had perhaps had plans of going into the solar energy business, and wants to make way for the business to flourish.

Nigeria bleeds and Nigerians are in pains.
May God help us.
Uzoma Ahamefule, a concerned patriotic citizen writes from Vienna, Austria.