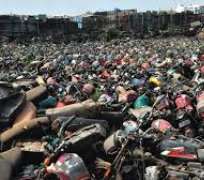 The furore generated by the ban on commercial motorcycles and tricycles is still unfolding. In as much as the ban is desirable, particularly at urban centres, a number of issues have been thrown up and the government needs to promptly attend to them.

A school of thought believes that for security reasons and for the fact that the State laws have always been unequivocal on restricting the Motorcycles & Tricycles from major highways and bridges, it sees nothing wrong with the steps taken by LASG to restrict the use of Okadas in certain areas.

Be that as it may, the first issue caused by this ban is the absence of alternative which has caused many Lagosians to resort to walking short and long distances.

Though the culture of walking is very good for our wellbeing, particularly short distances. The pertinent question is this: Is our environment designed to encourage walking? The obvious answer is a big NO.

To ensure that pedestrians are protected on the road, the Lagos State government needs to put the following in place as a matter of priority and urgency: Enforcement and provision of adequate sized and elevated walkways on all our roads which must be cleaned and swept regularly.

Not only that, sidewalks close to schools, shopping malls and major terminals should be adequately sized to accommodate the teeming pedestrians, particularly at peak periods. Benches and seats must be provided and placed at intervals for people to sit. Litter bins could be incorporated into these benches.

These sidewalks should be constantly swept and rid of silt, sand and litter to reduce pollution and dust count. Trees can be planted along these sidewalks to offer shade and filter the air. Of course, street lights, electric poles and signage must not be placed on the sidewalks.

Of note also is that sidewalks at traffic junctions with signals should have signals dedicated for pedestrians and integrated with the vehicular controls.

Since the level of air pollution is at an alarmingly high level, Lagos State government should embark on emission control of vehicles.

Until the emission is reduced, pedestrians should be encouraged to wear nose masks to prevent inhaling of toxic fume and polluted air.

Another pertinent issued thrown up by this ban is that of the school of thought that believes that there should have been a reasoned response to the issue which should be considerate and democratic, bearing in mind that the whole debacle was as a result of the Lags State Government (LASG) not being able to provide sufficient means of transport over the years. As such, there should not be a restriction, but regulation of their operations.

I am however quick to add that the State Government has not been consistent in its policies on transportation. With LAMATA and the various intramodal & integrated transport system initiated over the years if there was continuity in the plan, the state should have been out of this quagmire by now.

There were plans to phase out all the yellow buses and flood the entire state with modern buses through the BRT scheme, which has been extended to Agege Motor Road axis. Rather than the buses increasing, they disappear with the expiration of an administration, whilst another set appears at the inception of a new administration. The dedicated bus route cannot be justified as there are too few buses plying them. Whereas a wagon-like trail of buses are required.

The LASG should expedite work on the BRT extension to Agege Motor Road Axis and deploy hundreds of buses to ply the route. The LASG also needs to beef up our transport infrastructure under the current dispensation.

They may have to expedite action on the current blue line from Mile 2 to Marina. The only panacea to this debacle is a mass transit system.

The monorail that was begun by the Fashola administration had been sufficiently completed up till the National Arts Theatre with all the attendant roads and train terminals.

Any structure that is built and not used will dilapidate. This is exactly what's happening to our blue line. The state is losing a lot of revenue by not deploying that stretch to start serving the people on that axis.

In most developed economies with Mass Transit, they are usually commissioned in phases. The macroeconomic effects will be quite positive and substantial.

The corridor currently is in a terrible state, completely filled with filth, whereas it's supposed to bring more economic value to the area and by extension, to the state.

Whilst this debate on Okada is ongoing, can this option be considered and expedited? This will bring a lot of relief and succour to that axis and to the state.

Gbenga Onabanjo is the Founder/Executive Director of GO-Forte Initiative for the restoration of the environment.