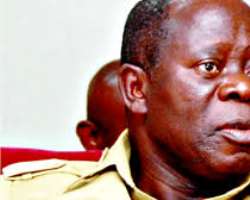 Ahead of National Executive Council (NEC) meeting slated for 17th of March, a big Billboard, posters and banners with the picture of the suspended national chairman, Adams Oshiomhole, has been removed. This is a significant blow to the suspended Chairman who is currently battling for his political life from various battle fronts.

It is reported that the biggest banner at the main entrance gate of the party house has been replaced with that of President Muhammadu Buhari, last night. The banner that replaced Oshiomhole's banner

Meanwhile, celebrations are said to taking place in Benin city by the political enemies of Oshiomhole, claiming that the last nail has just been hammered on the coffin.