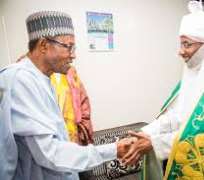 Although president Muhammadu Buhari has attempted to distance himself from the ordeals of the just deposed Emir of Kano, Malam Sanusi Lamido Sanusi, but the prominent Rights campaign platform - HUMAN RIGHTS WRITERS ASSOCIATION OF NIGERIA (HURIWA) has blamed him for continuous humiliation and illegal detention in Nassarawa state of the dethroned Emir. HURIWA has asked President Muhammadu Buhari to release Sanusi Lamido Sanusi forthwith and stop painting Nigeria graphically as a medieval cave whereby law and order are breached with reckless abandon.

Demanding that the president orders the immediate and unconditional release of the illegally incarcerated erstwhile traditional ruler Sanusi Lamido Sanusi , the Rights group said as the commander-in-chief of the Armed Forces of Nigeria and as the head of the executive arm of government which supervises the Department of State Services (DSS) and other para-milital and policing institutions, president Muhammadu Buhari is to be blamed absolutely for the unwarranted violations of the constitutionally guaranteed human rights of citizen Sanusi Lamido Sanusi. "The so called banishment of Citizen Sanusi Lamido Sanusi against constitutional norms, laws and practices, has brought unquantifiable global opprobrium on Nigeria and is a disgraceful policy that has made the current administration the topmost cabdidare for the award of global infamy and disrepute".

According to HURIWA: "It does not make sense for anybody to attempt to exonerate president Muhammadu Buhari from the gross breach of the fundamental human rights of the immediate past Emir of Kano Mallam Sanusi Lamido Sanusi. There is indeed no logic or rational bases for any attempt at deploying sophistry to try to exonerate The president. The president by virtue of the provisions of section 218(1)(2)(3) and 215(1)(2) and (3) of the constitution of the federal republic of Nigeria of 1999 (as amended) is empowered by the constitution as the head of the command and control infrastructures of the armed forced and police. These policibg and security forces are actively involved in the violations of the constitutional rights of the dethroned Emir. Section 218 states : “(1) The powers of the President as the Commander-in-Chief of the Armed Forces of the Federation shall include power to determine the operational use of the armed forces of the Federation. (2) The powers conferred on the President by subsection (1) of this section shall include power to appoint the Chief of Defence staff, the Chief of Army Staff, the Chief of Naval Staff, the Chief of Air Staff and heads of any other branches of the armed forces of the Federation as may be established by an Act of the National Assembly. (3) The President may, by directions in writing and subject to such conditions as he think fit, delegate to any member of the armed forces of the Federation his powers relating to the operational use of the Armed Forces of the Federation.”

HURIWA cited a plethora of human rights provisions being actively breached by the security forces detaining the former Emir to include-: Section 41 states: “(1) Every citizen of Nigeria is entitled to move freely throughout Nigeria and to reside in any part thereof, and no citizen of Nigeria shall be expelled from Nigeria or refused entry thereby or exit therefrom. (2) Nothing in subsection (1) of this section shall invalidate any law that is reasonably justifiable in a democratic society- (a) imposing restrictions on the residence or movement of any person who has committed or is reasonably suspected to have committed a criminal offence in order to prevent him from leaving Nigeria; or (b) providing for the removal of any person from Nigeria to any other country to:- (i) be tried outside Nigeria for any criminal offence, or (ii) undergo imprisonment outside Nigeria in execution of the sentence of a court of law in respect of a criminal offence of which he has been found guilty: Provided that there is reciprocal agreement between Nigeria and such other country in relation to such matter.”

Section 40 states: “Every person shall be entitled to assemble freely and associate with other persons, and in particular he may form or belong to any political party, trade union or any other association for the protection of his interests: Provided that the provisions of this section shall not derogate from the powers conferred by this Constitution on the Independent National Electoral Commission with respect to political parties to which that Commission does not accord recognition.”

Section 38 states: “(1) Every person shall be entitled to freedom of thought, conscience and religion, including freedom to change his religion or belief, and freedom (either alone or in community with others, and in public or in private) to manifest and propagate his religion or belief in worship, teaching, practice and observance. (2) No person attending any place of education shall be required to receive religious instruction or to take part in or attend any religious ceremony or observance if such instruction ceremony or observance relates to a religion other than his own, or religion not approved by his parent or guardian. (3) No religious community or denomination shall be prevented from providing religious instruction for pupils of that community or denomination in any place of education maintained wholly by that community or denomination. (4) Nothing in this section shall entitle any person to form, take part in the activity or be a member of a secret society.

Section states 36: “(1) In the determination of his civil rights and obligations, including any question or determination by or against any government or authority, a person shall be entitled to a fair hearing within a reasonable time by a court or other tribunal established by law and constituted in such manner as to secure its independence and impartiality.”

HURIWA cited the articles from the UNIVERSAL DECLARATION OF HUMAN RIGHTS that President Muhammadu Buhari is violating by detaining Sanusi Lamido Sanusi to include-:"Article 1: We are all born free. We all have our own thoughts and ideas and we should all be treated the same way.

Article 2: The rights in the UDHR belong to everyone, no matter who we are, where we’re from, or whatever we believe.

Article 4: No one should be held as a slave, and no one has the right to treat anyone else as their slave.

Article 5: No one has the right to inflict torture, or to subject anyone else to cruel or inhuman treatment.

Article 6: We should all have the same level of legal protection whoever we are, and wherever in the world we are.

Article 7: The law is the same for everyone, and must treat us all equally."