Raise The Bar of Moral Rectitude by Inculcating the Right Moral Values in Our Children, Gov. Uzodinma tells Imo Women 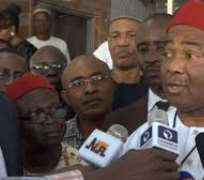 Today, marks the United Nation's International Women's Day Celebration and the Imo State Governor, Hope Uzodinma few hours ago sent in his message for Women of the state.

The Governor through his social media handles enjoined Imo Women to raise the bar of Moral rectitude in raising our children and contributing to societal development.

In his words, "On International Women's day, I Congratulate all Imo women for being agents of development. Women have a critical role in charting the course of development through positive engagements with the government and other relevant stakeholders

The International Women's Day is a day set aside by the United Nations to globally celebrate the social, economic and cultural achievements of women, as well as celebrate gender equality. The theme for this year 2020 is “Each For Equal: An equal world is an enabled world.”

I want to use this medium to challenge women. Imo women, in particular, to use their potentials to press forward holistic developments by bringing to the fore their intellectual and motherly endowments, and by so doing, moderate the excesses of humanity.

I enjoin women to raise the bar of moral rectitude by inculcating the right moral values in their children in discouraging cultism, promiscuity, indecent dressing, child trafficking among other vices.

My administration is gender-friendly. Going by the appointments made so far, I have given women a pride of place in the government of the State and I'm committed to carrying more women along in governance.

Intellectually endowed females are assets in the socio-economic agenda of the state, and we shall encourage them to be equal partners in the task of Reconstructing, Rehabilitating and Recovering Imo state".