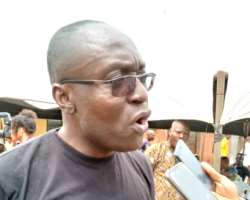 The amiable and youthful Honourable Commissioner for Youth Development, Comrade Ifeanyi Michael Egwunyenga has commended the PDP for its steadfastness in handling political affairs constitutionally and in the best interest of its members.

He made this assertion yesterday, Saturday 7th February, 2020, at Issele-Uku while participating in his Ward Congress in the town.

The Commissioner who is a leader in Ward Six (6) Issele-Uku, affirmed that it was a peaceful Congress, hinging its success to the ability of the PDP in doing the right things.

He also commended the Governor of the State, Senator Dr. Ifeanyi Okowa for showing the right leadership which has blossomed into enormous peace and unity enjoyed at the party line and across the State.

He said for his Ward, the Congress was peaceful and successful, adding that those party leaders at the ward level who were returned had performed excellently in their previous responsibilities and so merited the mandate given them by the members.

"I am happy for the turn of events in my ward. My people are excellently peaceful and there is no qualms at all. It also shows that they appreciate the sterling leadership qualities of our Governor which have transcended into dividends of democracy across board.

"And for those of us representing our people at the Government level, we will continue to preach the gospel of prosperity for all Deltans towards a Stronger Delta dream of Senator Okowa.

"So I thank the leaders who have been elected to form the executive at the ward level for conducting themselves in such a commendable manner. We will work with them and support them to ensure that they succeed in their tasks. I also want to advise them to support the Government of Senator Okowa in all its ramifications, so that at the end of his tour of duty, we shall all be proud of a Governor like Okowa that God gave us at this time", he stated.

Meanwhile, Mr. Ike Adigwe from Ogbe-Utu chapter of the PDP was returned as chairman of Ward Six (6) Issele-Uku.