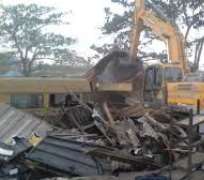 Dele Yaro, the FCT Assistant Director of Operations, Directorate of Road Traffic Services, who led the Joint Task Team, disclosed that the demolition was ordered by the FCT Minister, Mohammed Bello.

According to Yaro, residents of the community had in the past registered official complain about the operations of the mechanic workshops to the government for security reasons.

He said that was what prompted the demolition exercise after seven years of warning the defaulters who chose not to obey all the pleas advising them to quit the properties.

He said: “This is a Ministerial order against the use of premises, properties allocated to individuals.

“For several years we have been here warning and begging them to stop the misuse of these properties, but it fell on deaf ears.

“Since this property has not been developed, we have illegal shanties and illegal mechanics operating in the premises.

“That is why the Minister had asked us to come and carry out the order jointly.

“You can see that the Abuja Environmental Protection Board, the Police, Civil Defence are all here for this operation.”

Yaro explained that the team had a mandate of ensuring that properties are put to proper use, warning that the government would not hesitate in taking over properties from their owners.

He also threatened to seal Conoil filling station for harbouring mechanics workshop, which was not in consonance with the master plan of the FCT.

He said: “There is a clear warning to the owners of these properties, particularly to the Conoil filling station that harbours mechanics in their premises.

“If they repeat the same thing, the filling station will be sealed off and if possible the government will take over the property from the owners.”

On why it took the government so long to enforce the order, Yaro explained: “This is democracy.

“We are not operating in a military government.

“That is why the authority have to allow the right of people to prevail, which has been done.

“Like I stated earlier, if it has taken the government about five to seven years to issue warning for them to remove their illegal structures, I don’t think it is too bad if the government decides to take a stand against them now because they were given enough time to develop the plot.

“We will always be on ground to watch their operations in this premises.

“Not only at Kado Estate alone, but we will be moving round the city to plant our men everywhere to make sure that they do not come back.”

Yaro added that since November 2019 when DRTS embarked on the campaign and sensitisation against illegal movements of tricycle on the highways, use of unpainted vehicles, the rate of crimes, especially the one-chance syndicate, had reduced in the FCT.

“This operation is encompassing, it is not only vehicles or mechanics that is why we have come jointly,” he said.