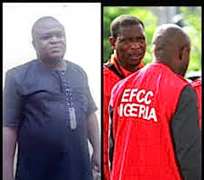 It is with deep regret we wish to respond to stories, which emanated first from yellow blogs and journals, that His Excellency, Chief Timipre Sylva, former governor of Bayelsa state and Minister of state for Petroleum Resources purportedly acquired a certain facility for the conduct of the recent Gubernatorial elections in Bayelsa state

Among stories and allegations that have been responded to over the years, this is by far the pettiest and most preposterous. Comical even, if you look at it without the bile of its engineers

It seems almost like shadow boxing because the said group doesn't seem to exist anywhere, their first and only appearance anywhere at all seems to be this deeply annoying fabrication. The purported leader of the group, too, doesn't seem to have any digital footprint save for publications that seems to suggest he was arrested by the EFCC for claiming to be a prophet and duping a victim the sum of 2.6 million naira

So what group is this that doesn't exist and what seemingly fugitive leader it has? The sadder part is that a few sections of the media went to press without authenticating the group. Does this now imply someone can manufacture a 'coalition', its leader and use it purely for the purpose of character assassination?

But since, courtesy of some sections of the media, we must now deal with ghost groups, then we must for the sake of clarity

Chief Sylva at no time took monies from IOC's, the NDDC or agencies within his ministry for the sake of the elections in Bayelsa. There are no substance, whatsoever, to the claims. Just imaginations, assumptions, and what must be reflections of the darkness of the hearts of that story's architects and sponsors hiding behind a shadow

This 'group', real or conjured, is challenged to produce evidence of it's strange allegations.

Journalism is a noble profession and there is an enormous number of Nigerians practicing it with integrity and value, it is shocking this story did not end at gossip blogs, where all unfounded, malicious and obviously fabricated story belong.

Julius Bokoru is the Special Assistant on Media and public affairs to Chief Timipre Sylva, Minister of state for Petroleum Resources