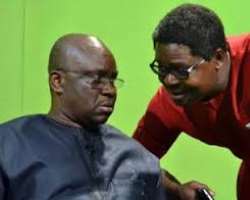 Lere Olayinka, the spokesman of a former Governor of Ekiti State, Ayo Fayose, is being held by the police, the Peoples Democratic Party has said.

According to the PDP, the Ekiti State Police Command had invited the ex-governor’s spokesman for invitation but he had yet to be released 12 hours after.

The Spokesman of the New Media team of the party in Ekiti State, Bola Agboola, alleged that Olayinka was being detained by the police on the orders of Governor Kayode Fayemi and the All Progressives Congress.

Agboola said: “Today, Lere Olayinka honoured the invitation by the police in Ekiti State over allegations of financial impropriety made against him by the Fayemi-led APC government.

“He has made his statement, describing all the allegations as false, frivolous and politically motivated.

“He is waiting for further action by the police, who may be taking directives from the state government.

“The worse is being expected though and it can’t be worse than what was done to him by this same Fayemi’s government on October 8, 2012.

“Nigerians should, however, be rest assured that Lere Olayinka won’t be silenced, he won’t be intimidated.”