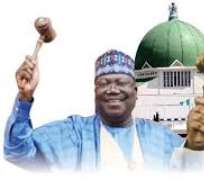 While Nigerians continue to endure the pains of economic quagmire, security breakdown, subversion of majority will on the ground of technicality at the alter of the judiciary among others, the 9th National Assembly continues to sponsors obnoxious bills that seems to suit their personal interest and in some cases further divide the people.

On 25th February, 2020, a bill seeking to grant immunity to the principal officers of the National and State Houses of Assemblies moved to the second reading at the floor of House of Representatives. The bill according to Olusegun Odebunmi, a lawmaker representing Ogo-Oluwa/Surulere Federal Constituency of Oyo State will alter Section 308 of the 1999 Constitution of Federal Republic of Nigeria by extending immunity to cover presiding officers of legislative institutions if passed the final stage of lawmaking.

Section 308, subsection 2 of the constitution stipulates that: (a) No civil or criminal proceedings shall be instituted or continued against a person to who this section applies during his period of office; (b) A person to whom this section applies shall not be arrested or imprisoned during that period either in pursuance of the process of any court or otherwise and (c) No process of any court requiring or compelling the appearance of a person to whom this section applies shall be applied for or issued. Specifically, the subsection 3 of the section spells out those to enjoy the previlege of immunity from persecution as the president, the vice president, governors and deputy governors

Though, this seems to be a very good bill because it will reduce the incursion of the executive in the internal affairs of the legislature. But at the same time, it poses a great danger to the nation's development because it will open a floodgates for the remaining legislatures to demand for the same thing in future.

Predictably, if that happened, the National and State Assemblies will automatically become a safe haven for the corrupt governors and others who might have looted the treasury of their State dried while in office.

As a matter of fact, an average Nigerian lawmaker is ready to use all the money in the nation's purse to purchase material things even at the detriment of the citizens. This can be deduced from their recent decision to purchase cars worth 5.5 billion Naira despite the high level of poverty in the country.

The funniest part of the decision is that the cars are not to be purchased from the Nigeria based company like Innoson Motor Company (IMC) but abroad. Obviously, similar thing would have happened if they had succeeded in their quest to use 37 billion Naira to renovate a complex built with less than 10 billions in 1999.

Whereas, Nigerians voted for the lawmakers in 2019 in order to make laws that will engender development and reduce the pains of Nigerians. In a dramatic form, one of the lawmakers at the floor of the National Assembly even made a roll call of his wives and publicly promised to add more children to the 27 children already on ground.

No wonder the nation continues to move from one form of challenge to another. However, having more than one wife is not a crime but it is abnormal to begin to showcase them at the floor of National Assembly as if they are elected for wife and children competition.

Members of both National and State Assemblies are called honourable members not because of the number of wives they married but because of the honourable functions they are expected to perform. However, in Nigeria's case the narrative seems to be opposite.

In 2019, one of the lawmakers proposed a bill seeking death penalty for hate speech while those that continue to steal the nation's wealth continue to move around freely without any fear of death. Ordinaryly, one would have expected that the lawmaker proposed a bill seeking dealth penalty for corruption since there is a strong nexus between corruption and poverty.

The World bank in her recent report claimed that 87 percent of the poor people in Nigeria reside in the North yet some representatives in the region continue to propose obnoxious bills. For instance, a lawmaker representing Yobe East District in the Senate, Senator Ibrahim Gaidam, on 20th February, proposed a bill seeking a special agency for the repentant Boko Haram while the victims of Boko Haram's activities continue to live in fear and poverty.

Therefore, while Nigerians continue to endure the pains of the hard reality on ground in the country, the legislatures should try and relief this pains by coming up with anti-poverty and people oriented bills instead of entertaining themselves with obnoxious bill and other ideas that negate the reason for their existence.