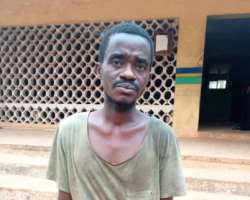 A 27-yaer-old man, Ejike Okata has been arrested by police in Ogun state over the death of his neighbor, one Adeyiba Oladipupo, 50 who he was said to have matcheted to death.

The suspect was arrested following a report by the younger brother to the deceased who reported at Obalende police station ijebu ode on the 28th February 2020 that his elder sister who resided at Ayegbami area of ijebu ode was matcheted to death by his neighbor over a minor argument and that the suspect ran away immediately after the incident.

The Police Public Relations Officer for the Command, Abimbola Oyeyemi confirmed the incident to The Nigerian Voice.

He said "Upon the report, the DPO Obalende division CSP Omonijo Sunday mobilized his detectives to the scene where the corpse of the victim was recovered and taken to ijebu ode general hospital mortuary for autopsy, while serious manhunt was launched for the fleeing suspect."

The efforts of the detectives yielded positive result today 1st of March 2020 when the suspect was about boarding an Ebonyi state bound motor but was apprehended by policemen who have already laid ambush for him due to intelligence information they already have about him.

On interrogation, the suspect who hailed from Onueke in Eza south local government area of Ebonyi state confessed matcheting the deceased to death because she accused him of stolen a phone which infuriated him.

He confessed further that he cut off the woman's two hands because she wanted to struggle the Cutlass with him.

The Commissioner of Police in the state, CP Kenneth Ebrimson ordered the immediate transfer of the suspect to homicide section of the state criminal investigation and intelligence department for further investigation and prosecution.