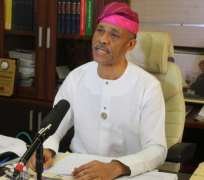 The health of the first Coronavirus patient being managed at the Mainland Hospital in Yaba, Lagos, is improving.

The Commissioner of Health in Lagos, Professor Akin Abayomi, disclosed this on Saturday at a media briefing where he gave an update on how the patient was being managed.

He, however, said the state government has yet to put the number of contacts that have been identified so far together because the figures were still being collated.

Professor Abayomi urged the residents not to panic and assured them that the government was putting necessary measures in place to curb the spread of the virus.

He gave the updates ahead of a meeting of health officers involved in the management of health emergencies in Nigeria.

The gathering is expected to take place at the Emergency Operation Centre located within the Mainland Hospital, Yaba.

At the meeting, representatives from Federal and state governments, including officers from the Nigeria Centre for Disease Control (NCDC) would plan strategy on how to curb the spread of the first confirmed case of Coronavirus in the country.

Professor Abayomi spoke to reporters barely two days after the state government confirmed the first case of the novel coronavirus in Nigeria.

Speaking on behalf of the state governor, Babajide Sanwo-Olu, the commissioner revealed that the case was confirmed on Thursday and reported to the Federal Ministry of Health.

The case involved an Italian citizen who travelled to Nigeria on Tuesday from Milan, Italy for a brief business visit.

He was said to have fallen ill the next day and reported at a hospital in Ogun State where he tested negative to malaria.

After studying the nature of his illness, officials at the medical facility referred the patient to the Lagos State Biosecurity Facilities for isolation and testing.

He was confirmed to be infected with coronavirus by the Virology Laboratory of the Lagos University Teaching Hospital, part of the laboratory network of the NCDC. (Channels TV)