"We are saddened by the state of insecurity in the land...." Aare Prince Osibote (OPC President General) 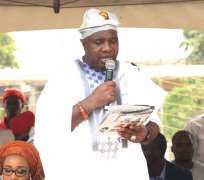 The President General of Oodua Peoples Congress (OPC), Aare Prince OSIBOTE, has expressed sadness over the state of insecurity in Nigeria. He spoke at the First Late Dr Frederick Fasehun Annual Memorial Lecture held on Saturday, February 29, 2020 At Nitel Compound, Agege Motor Road, Oshodi Lagos. He used the platform to extoll the rare virtues and vision of the revered late founder of the Organization. In his address to the guests and members at the ocassion, Aare Prince Osibote thanked former President Olusegun Obasanjo for using the inaugural lecture to further admonish Nigerian leaders on the security situation of the nation, preach Peace and social justice.

Below is speech of the OPC leader:
"Members of Oodua Peoples Congress( OPC), Gentlemen of the Press, Distinguished Ladies and Gentlemen.

History is being made today with the take-off of an annual memorial lecture in honour of a distinguished son of Nigeria, Dr Frederick Isiotan Fasehun. This epic event could not have come at a better time, given the multifaceted challenges facing the country and the determined quest for national rebirth and renaissance in the largest Black Nation on earth. We celebrate a man whose vision and legacies have outlived him. We must beware of OPC impostors whose postures are at variance with Dr. Faseun's vision. vision on its own is not enough: hard work, focus, dedication and loyalty are required to translate a vision to reality. I salute you all members of OPC for leaving an enviable trail on the path of this organization. We, in mainstream OPC are assailed by requests and pressure from well-meaning Nigerians and other critical stakeholders to reinvigorate the machinery of OPC as a veritable bridge-builder and reconciliatory agent. That is one of the objectives of this lecture.

We want to raise the bar of national discourse among Nigerians and reset the barometer of the nation such that all of us can be on the same page.

Therefore, it is no surprise that all the dignitaries from major ethnic groups that make up the federation, cutting across all professional background and creed have converged to rekindle the hope of nationhood, common national identity and engrave in the subconscious of all Nigerians a deep sense of patriotism and nationalism.

We have come a long way as a people and a country. We have travelled through many rough roads and paths, paid huge prices and suffered enormous deprivation. In life, there is no gain without pain, however, all that glitters is not gold hence, I say enough of the season of recrimination. We have all wronged one another in one way or the other. We have made our mistakes; some of us failed to show remorse even when we are conscious that we erred advertently or otherwise. We are saddened by the state of insecurity in the land. The challenge is exacerbated by unbridled poverty, illiteracy and ignorance, coupled with lack of vision and character by a section of the Nigerian political class. We frittered away ample opportunities that came our way to consolidate on our strength, human capacities and natural endowments.

Rather than building enduring institutions, we have allowed individuals to establish fortresses, build business empires and deploy their affluence to hijack the political space and the economic corridors. We need a paradigm shift from the degradation, rot and decadence before our society further degenerates and descends into the abyss. Nigeria remains a potentially great threat to other major powers, including the advanced economies and democracies. But what constitute its Achilles’ heel is attitude and lack of vision. However, we are proud of all of you distinguished senior citizens present here today that have remained resolute, focused and faithful to the cause and pursuit of the attainment of nationhood by Nigeria.

We appreciate the various interventions that you have individually and collectively been making to promote the cause of justice, fair play and equity in the society. Despite the fact that some of your actions are often misconstrued, all of you have remained a source of inspiration and confidence about a greater tomorrow.

We want to assure you that OPC will not derail in its chosen path of speaking the truth; protecting the rights of Nigerians and imbuing the culture and values of integrity, discipline, honour and prestige. We will ever be firm, open, cultured and disciplined as true disciples of Dr Fasehun. OPC started problems, which was against the intentions of the Founder, when criminality was imported into the organisation through the active connivance of the elites. This forced many discerning men and women of goodwill to distance themselves from the group. However, the present leadership of the OPC is making every legal effort to weed out undesirable elements from its midst and inculcate in our members the virtues of hard work, integrity and patriotism as laid down in the vision of the Founder.

In conclusion, we unambiguously denounce the spilling of blood in the land, banditry, abduction, kidnapping and other forms of heinous crimes that have almost made life miserable in some parts of the country. The dynamics of economic growth, development, prosperity and success are never found in savagery. We need peace, not the peace of the grave yard; we want and deserve sincere and genuine peace founded and grounded on justice, equity and fairness. While thanking you for your support in all ramifications, I am assuring you of a steady progression in general reforms designed to consolidate the enviable records and gains of the OPC since its inception which will take OPC as an institution, to loftier heights.

Again, I thank you.