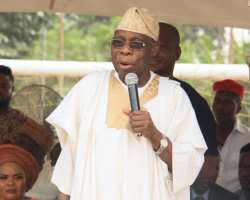 Former President Olusegun Obasanjo has spoken on the increasing insecurity in Nigeria.

Obasanjo spoke on Saturday at the 1st Memorial Lecture for the late founder of the Oodua People’s Congress (OPC), Frederick Fasehun.

The former leader stated security and political structure were of great concern to Fasehun.

Obasanjo said the first duty and responsibility of a leader of any human community or organisation is security of life and property of all the members of the community, the organisation or the society.

He said there is no doubt that the national security architecture, apparatus, system and arrangements in Nigeria today have failed to measure up to the needs of the citizens in different parts of the country. Obasanjo lamented that even the President Muhammadu Buhari himself confessed that he was shocked to come to know that things are that bad.

Obasanjo noted: “The Governors in different States of the country as the Chief Security Officers of their respective States were taking measures to enhance and buoy up security for their citizens. These measures vary from paying off bandits, to hunting them down with vigilantes and hunters and innovative joint efforts like Amotekun.

“What these Governors have shown was that they were concerned and they cared. I would not know if any of them was shocked but most of them took steps as they deemed fit to enhance the security of life and property for their citizens and to augment the failing and inadequate security provided at the national level.

“Whatever we may feel individually or collectively by these different measures, these Governors must be commended and where necessary, they should be helped to refine and make robust and efficient the effective measures they have taken, from Katsina to Zamfara, from Adamawa to Benue and from South East to South West. From my personal observation as I talked to people and people across the board talked to me, nothing has united the people of South West like Amotekun since independence except independence itself. Not even the civil war was such a unifier.

“I commend the Governors of South West for their bold and courageous measure taken beyond political party affiliation to improve security architecture and care for their citizens. I particularly commend Governor Seyi Makinde of Oyo State for his leadership on this matter and for sharing their thoughts with me. Security measures are never static and security is the responsibility of all of us but by appointment and elections, some have more responsibility than others.

“It is instructive to note that the Nigerian Supreme Council for Islamic Affairs (NSCIA), under the leadership of Sultan of Sokoto, became extremely worried about the level of insecurity in the country and then called on President Buhari to declare a state of emergency for security in the country. ”The NSCIA has followed the line of other organisations, institutions and individuals who have expressed dismay and disappointment at the level of insecurity and criminality all over the country as if there is no government in charge in this country. Calling for an emergency is a wake-up call for the Federal Government to know the magnitude of the level of insecurity and to take effective measure or measures to stem the tide.

“The Northern Elders Forum has spoken out on the pervasive insecurity in the nation. The Governor of Borno, Babagana Umara Zulum, has pointed out that in his eight months in office, Auno, a community in his State, has been attacked six times.

“The Governors of South West acted, believing that Amotekun is one of the necessary measures. And most people of the South West support them. I will strongly advise that Amotekun and other measures put in place should continue to be refined and improved upon to serve as adequate complement and enhancer of present, disappointing and inadequate, national security architecture and provision.

“We must learn from the past, particularly from Native Authority Police. Professionalism and adequate equipment for the job are imperative for a serious security apparatus. Security is the foundation of all human development and progress. Common assured security should lead to common and shared prosperity and development.

“There has been embarrassing paralysis and katakata in the present nation’s security house as if we have nobody in charge. If it had happened before, it was not so brazenly in the public domain. This type of situation cannot do credit to us as Nigerians and it can only sap confidence in the security architecture for people to say, ‘no wonder’. The President must accept the challenge and the responsibility.

“Let me move to the second currently germane and raging issue of our political structure and arrangement which if Dr. Fasehun were here would have been of great interest and concern to him. He showed concern about this issue when he was alive.

“The agitation at the end of the last century was for ‘true federalism’ substantially brought about by Abacha’s autocratic and pernicious rule and self-succession and perpetuation and the process by which the democratic Constitution emerged. My administration was an inheritor of part of that agitation. The product of the political conference set up to address the agitation in part, if not in full, and which was personally handed over to the National Assembly was not advanced to conclusion by the National Assembly.”