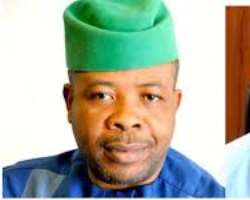 Before I commence on this hurriedly put together article, I am irredeemably obliged to first congratulate Justice Amina Augie and her colleagues concerning their pronouncement on the Supreme Court Review on the Bayelsa State governorship election. I equally want to add that, while that decision was apt and highly supreme, that that Supreme Court decision on Imo State was a supreme injustice that is bleeding for an urgent attention. A decision that failed common arithmetic of 10 + 10 cannot be supreme.

Justice Amina Augie, the leading judge on the Bayelsa Supreme Court Review, said while reading the judgement that the request by All Progressive Congress, APC and David Lyon to set aside their earlier judgement was “highly vexatious, frivolous and gross abuse of the judicial process.” I am in total agreement with her that such insulting and highly embarrassing request was clearly a very violent disrespect to the Supreme Court and indeed desecrated “the sanctity of the court,” like she said.

Morally, legally and logically speaking, the sacked elected governor of Bayelsa State Lyon was a beneficiary of the fraud committed by his running mate Biobarakuma Degi-Eremienyo because they had a joint ticket and as such were an inseparable entity. Without any iota of doubt many people in Bayelsa believed in Degi-Eremienyo and proportionately voted for APC because of him. How can one quantify the influence he had had on people that perhaps influenced them to vote for APC during the election? Do you as a sane person expect the law to acknowledge and welcome that deceit that took place in Bayelsa State, legitimize the illegality and affirm the fraud and lawlessness as a way of life? No. He cannot be allowed to benefit from such fraud.

To cap the sound judgement up, the judge made no mistake pronouncing lucidly that the applications they had sought for “lack merit and constituted an abuse of court process.” Now the case of Emeka Ihedioha and his party, Peoples Democratic Party, PDP, comes in here.

To those people who are either too economical with the truth, playing partisan politics, genuinely guilty or unable to task their brains, or who are bootlickers, the immediate above quote from the Supreme judge simply means that the Supreme Court can review its decision but that such request or application for a review must have merit. Ihedioha and PDP’s application for a Supreme Court review on Imo State has cogent merits with facts and figures.

Many people like me knew from the genesis that the plaintiffs (APC and her members) were consciously aware that nothing would come out of their review request on Bayelsa State, but that they deliberately made the demand with their minds craftily focused on a predetermined result of indirectly hoodwinking or influencing the upcoming Imo State Supreme Court review demanded by Ihedioha and PDP. The motive was to ride on a erroneous chorus that would emerge after their failure like people are chorusing today that, “Supreme Court decision is final, … we should accept it because there must be a stop to litigation. APC has accepted the Supreme Court’s decision on Bayelsa in good faith, PDP should also accept the decision on Imo”. But they keep blind eyes to the fact that the two issues are two different cases in two parallel lines.

The danger of this decision in Nigeria
All of us in Nigeria should be very careful and be warned here, because the honest truth is that whether we are APC, PDP, APGA, AA, Accord etc., or apolitical, we all are involved in this dangerous rat race. Perhaps many of us have not thought deeply about the futuristic implications of this disappointing and embarrassing judgement on Imo State’s 2019 governorship election. One could be the beneficiary of this very supreme injustice today, but conceivably it could turn to hurt the same celebrator tomorrow since Supreme Court decisions are references as ultimate yardsticks of every judgement.

Futuristically speaking, envisage yourself as one who contested an election and won, and your opponent went to court challenging your declaration, and probably he or she had more money or was closely connected to the government of the day, and with such influence, plans on how to rob you of your mandate were conceived and marshalled out. And somehow, the court had to miraculously manufacture votes more than the number of the people who had originally voted in the election and allocated all the votes to your opponent – because there would be no way the judges could successfully execute the evil agenda of pronouncing your rival a champion without unpalatable figures more than the lawful voters – and declared your challenger the winner. The illustrated scenario is a similar case playing out in Imo State now, and those celebrating it should wait for a turn around, because karma is a bitch. Consequently, if we all do not in unison come out of our political affiliations to condemn this evil and seek paradigm of change, and if this brouhaha is supported and affirmed under any guise to stand, it would eventually metamorphose into a monster that would consume all of us that included the judges that took this decision. And it will be the beginning of the total destruction of whatever justice still left in Nigeria.

The erroneous mantra of “Supreme Court decision is final,” and that “their must be a stop to a litigation” holds no water here until supreme judges begin to take supreme decisions.

Things being equal, I still want to objectively say that the Supreme Court judges are humans, and considering the enormous volume of cases they had to treat and the voluminous paper works they equally had to go through within a very short time frame allowed by law, that that decision on Imo State was an oversight that will be justly addressed by this review.