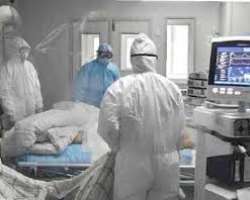 Last month, the latest disease in town: the corona virus hit China with some deaths recorded and many severely ill from it. Many countries were caught in a crossroad as the communist country is a strategic partner to so many countries of the world. Many countries in the west most notably the United States were forced to shut down their operations there and the neighbouring Japan recently announced that all schools will be sit down as from next week Monday to curb the spread of it.

Nigeria wasn’t left out as many of her businessmen flock to China to import goods. Many of these entrepreneurs were stranded there as they couldn’t buy goods since the Chinese government shut down most of their factories and couldn’t return home for fear of spreading the disease.

Egypt recorded the first case in Africa and some die hard optimists and prayer warriors opined that it won’t come to Nigeria which prides herself as the ‘Giant of Africa’ albeit tragically with the feet of clay.

On the 27th of February, 2020, the worst happened as the first case of the corona virus was recorded in Lagos. An Italian man from Milan who was travelling and passing through Lagos had the disease which was not detected at the airport. The disease was diagnosed at the virology laboratory of the Lagos University Teaching Hospital and the patient is currently being looked after at the Centre for Disease Control in Yaba.

If this first case is not well managed, it has the potential of causing havoc in the city that is regarded as the economic hub of the entire West Africa. Lagos has over twenty million residents and something worse than the plague of black deaths that swept the entire Europe in the Middle Ages may reinvent itself here if care isn’t taken.

The health authorities have taken a pro active step which is highly commendable by trying to identify those who flew with him and the places he has visited in Lagos. Much as it is a step in the right direction, how effective will that be especially in a country where there is the absence of data?

The health authorities must also ensure that unscrupulous elements don’t take advantage of this new crisis to create a widespread panic through the abuse of the new and social media.

The authorities should tackle this new scourge in a similar way that the ebola virus was tackled nearly six years ago.

As gleaned from the Africa Report Magazine: On 20 July 2014, a man carrying the disease travelled from Liberia to Lagos. Patrick Sawyer was not diagnosed with Ebola for three days, during which time nine health care workers were infected.

However, once the diagnosis was confirmed, the health ministry worked with the US Centers for Disease Control and Prevention’s office in Nigeria to declare an Ebola emergency and created the facilities to isolate exposed people during the requisite 21-day monitoring period.

It also put an Incident Management System in place to coordinate responses. The centralised response system was vital in controlling the outbreak.

This same approach should be adopted to handling this new scourge. Systems should be sturdily put in place to combat it and people who have the symptoms should be promptly isolated, monitored and treated before being allowed to go back to the society. There should also be measures put in place to ensure that health workers don’t kick the bucket the way they did during the ebola virus saga. We recall the bravery of the largely unsung heroine, Dr. Stella Ameyo Adadevoh of First City Consult Hospital who contacted the disease when she tried to stop Patrick Sawyer – the Liberian from leaving the hospital. At a trying time like this, we don’t need more post humous heroes and so it is imperative that the health authorities must do something urgent to protect their own.

During the ebola period, the Roman Catholic church stopped its adherents from shaking hands during the offertory. The religious groups which are arguably the most influential in the country can be co-opted to help in the fight against this disease. The clergymen should assist the government by preaching from the pulpit in order to more effectively drive the message home.

The use of hand sanitizers should be made compulsory in every public place and the mass media especially the government controlled ones should swiftly spring into action and penetrate the hearts of the masses in both Pidgin English and the Vernacular on the need to maintain the highest form of personal hygiene.

The health authorities should also roll out extensive preventive measures that the citizens can take advantage of as prevention is better than cure goes the age-long aphorism. Care should be taken for the disease not to spread outside Lagos so that we can forestall an epidemic.

In the immortal words of Dr. Martin Luther King Jr we shall overcome.