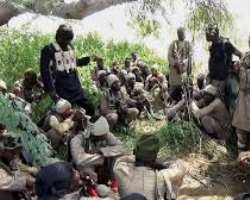 An uncle to the Leader of the Civilian Joint Task Force (JTF) in Bambula community, Chibok Local Government Area of Borno State, Mr. Jona Bitrus Who is resident in Maiduguri has confirmed to The Nigerian Voice that his nephew, Mohammed Abba was abducted on Wednesday evening by suspected members of the Islamic State of West Africa Province, ISWAP who invaded the community, targeting the leader of the CJTF.

He also stated that he was informed that the Boko Haram insurgents attacked the community around 4am on Wednesday when most of them were still asleep.

Bitus further explained that his people told him that his nephew has been a target of Boko Haram insurgents because of his refusal to compromise with them and for his utter stubborness to them.

According to his uncle, the Leader of the Civilian JTF Mohammed Abba was abducted alongside some villagers in the community who are yet to be identified because during the attack, most of the villagers ran in different directions into the bushe. Some of the residents started returning to the village midnight and this morning, Thursday with injuries but no death reported yet.

It will be recalled that civilian JTF in Borno State is a volunteer vigilante group of youths of both gender created to complement the efforts of the Nigerian military in the fight against the Boko Haram insurgenc in Borno State and other parts of the north-east.