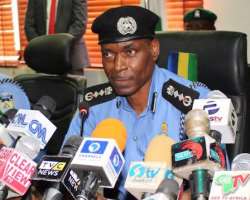 Onitsha, Eastern Nigeria, Feb 27, 2020-There is no other way to describe the Tuesday, Feb 25, 2020 request at Nigeria’s House of Reps by IGP Adamu Abubakar for ‘250, 000 rifles and 1000 APCs, etc’ than to link same link to ‘service mediocrity’. We further wonder when Nigeria Police Bosses and their military counterparts will grow beyond service emptiness and do away with archaic policing and soldiering. We also do not know why when other police services or forces around the world are fully embracing ICT policing; the NPF is busy racing back to the Yore and its concomitant archaic or anachronistic policing.

It is recalled that the IGP had on the said date at the House of Reps Committee on Police Affairs, claimed that ‘the Nigeria Police Force, apart from inadequate personnel, further need 250,000 rifles and associated munitions, 1000 Armored Personnel Carriers (APCs), 200, 000 riot gunners and smoke pistols, 2m tear gas canisters, 1000 tracking devices and 774 operational drones, among others”. The Force is notorious in policing incompetence and has been haunted by ‘chronic data system collapse’ including total collapse and mal-functionality of its central crime statistics and database.

This is not to talk of near-total, if not total absence of a credible database of weapons in the armories of the Force and their movements, uses and safety. As a matter of fact, the data deficiencies in the NPF are inherently entrenched and chronic. A competent, lettered and ICT compliant IGP should have provided the credible statistics of the number and type of weapons and personnel at the disposal of the Force and their functionality index, before demanding for additions or otherwise.

In other words, the IGP should provide concrete answers to the following: how many rifles, APCs and related weapons and ammunitions as well as personnel are there in the NPF? Where are they? Are the rifles and related weapons safely or porously managed? Are they being used for purposes they are legally meant for or illegally used for motley of ‘service crimes and atrocities’ such as being used in aiding ‘religious and economic terrorist activities’ and high profile street and roadway criminalities (i.e. kidnappings)?

Are the weapons and personnel truly used for securing generality of the citizens or for sundry roadway crimes such as extortion? Is it correct to say that many of these weapons and personnel are channeled into protection of the so called VIPs and corporate establishments such as banks and multinational companies; all done in return for payment of billions of naira monthly which never reflect in any police budget except in private pockets or coffers?

At the non state actor level, our questions are: are there credible statistics domiciled with the NPF showing the number, movement and use of illicit weapons such as small arms and light weapons in Nigeria or any part thereof? How secured by the NPF through Police Border and Waterways or Marine patrols are Nigeria’s four transnational borders and over 8,600 kilometers of waterways?

Proliferation of illicit small arms and light weapons is real, routine and indiscriminate in Nigeria; can the NPF tell Nigerians how many are in circulation and the number of their bearers and what they are used for? In all, by the NPF account, if any, how many small arms and light weapons are licitly and illicitly in circulation and in wrong or right hands in Nigeria and what are their effects or security and safety consequences for the country and its general citizens in the nearest or distant future?

The truth is that none of the recent bosses of the NPF including the present IGP have had what it takes to move the Force beyond petty, ethno-religious, primordial and archaic policing. With the evolution of ICT including electronic or e-policing and intelligence, modern policing no longer relies heavily on ‘quantitative manpower policing and gun-culture’. The ICT has also outdated or reduced the applicability of the UN’s “400-500 citizens per police person” recommendation. The NPF is also productively at ground zero as it cannot even produce or manufacture ordinary tear gas canisters, not to talk of guns and ammunitions it uses.

The modern policing is now powered or driven by “man-mental-machine” policing. ‘Man and mental’ here represent skillfully and mentally developed police personnel while ‘machine’ represents lesser gun culture and huge inroads into electronic policing which include e-intelligence, e-devices and e-investigation. The power of ICT in policing is exemplified by a case of an ICT compliant kidnapper holding a rifle and a smart phone. While the rifle is likely to remain un-fired throughout the kidnap operation or criminality, the smart phone will be put to function from the beginning to the end.

Therefore, Intersociety makes bold to say that with the evolution of modern policing, what is needed in Nigeria is not flooding of the country’s space with ship-loads of assault rifles and related munitions or injection of over-bloated man power all in the name of ‘equipping the Nigeria Police Force’. The NPF has enough man power to police anywhere in the country. Until the arrival of this 2020 budget season, the NPF’s annual budget had steadily gulped N300b and in this budget season of 2020, N408b is allocated to the Force, an increase of extra N108b; yet the Force has little or nothing to show for it in matters of internal security and law enforcement.

Apart from being secularity challenged, the NPF is also embroiled in corruption and chronic incompetence. Most of its administrative and field personnel are computer illiterates and many more do not have the skills of modern policing including mental and physical skill development. Corporately, the NPF central crimes database, forensic and ICT are nothing to write home about. Weapons in the hands of the personnel of the Force are not only turned against the law abiding citizens but also ferociously used in robbing them at road and street ways, as well as torturing, maiming and killing them and destroying their properties.

The truth is that the modern trends of policing and militarization across the world are now rested on downsizing and man-mental-machine powered policing and not proliferation of man power and gun culture. In China, for instance, a country of 1.42b people, it has 1.5m police personnel policing over 1.4b citizens with landmass of over 9.5m km2. In other words, China’s landmass is over ten times more than that of Nigeria’s 923,000 km2. With population of over 1.4b citizens, China has 150, 000 police officers for over 142m citizens; 15,000 for 14.2m and 1.500 for 1.42m citizens.

Comparatively, Nigeria with a population of about 200m is policed by 300,000-370, 000 or 30,000-37,000 police officers for 20m citizens or 3,000-3,700 for 2m citizens. Compared with China, it shows clearly that more police personnel police lesser number of citizens in Nigeria than in China where lesser number of police officers police higher number of citizens. China is cited here because it is noted with the highest population of police personnel and land army or soldiers in the world.

The country (China) had steadily cut down the size of its soldiers from about 6m in the past few decades to less than 3m-3.5m in recent times. This was done in response to evolution of ICT soldiering and policing; ensuring sophistication, efficiency and capability. In Russia, too, a country of 17.1km2 of landmass, the largest in the world; it has a total of 904,000 police personnel policing its internal large territory in addition to its population of 144.5m.