Abia man lands in prison for posing as EFCC operative 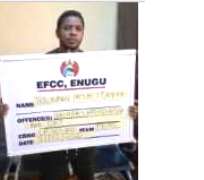 A middle aged man in Abia state, Ikechukwu Prospect Onyeka has landed in Umuahia prison for impersonating as an operative of Economic and Financial Crimes Commission, (EFCC).

The Enugu Zonal office of the EFCC arraigned Onyeka, before Justice Onuoha A.K. Ogwe, of the Abia State High Court, Umuahia, on a two count charge of impersonation and obtaining by false pretence.

Onyeka was alleged to have posed as a staff of EFCC, offering to help a complainant bring to an end to his case, if he would pay him some money.

The petitioner disclosed that he became suspicious of the defendant knowing that the EFCC brings professionalism and integrity of the EFCC in carrying out its duties.

When the petitioner contacted the EFCC, he was advised to play along with the defendant while a trap was set for him by the Commission. He was arrested when he went to his bank to cash the sum sent to his account as bait.

The suspect pleaded not guilty to the charges while Justice Onuoha adjourned till April 2 and 9 for commencement of trial. He ordered the defendant to be remanded in Umuahia correctional facility.