Immunity clause: HURIWA to senate; Reps: - Only the Guilty Are Afraid: 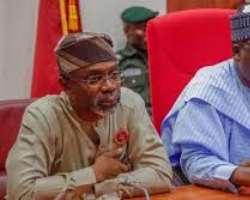 The prominent civil Rights advocacy group – HUMAN RIGHTS WRITERS ASSOCIATION OF NIGERIA (HURIWA) has alleged that both the senate president and the speaker of the federal House of Representatives may be afraid of possible prosecution over something only both of them know for rushing up a bill to grant themselves immunity from prosecution.

HURIWA has at the same time showered encomiums on some of the Federal House of Representatives like the factional minority leader Mr. Ndudi Elelu for kicking against the obbiously bad piece of proposed legislation to confer undeserving immunity from prosecution to the proncipal officers of both the upper and lower chambers of the National Assembly. The Rights group said the fact that some common sense has prevailed on the side of those who opposed the bill has shown that even amongst 'thieves' there are honourable men and women.

Telling the hierarchy of the National Assembly that only the guilty are afraid, the Rights group totally condemns the bill seeking immunity for lawmakers from prosecution just as the Rights group asserted that constitutional democracy thrives when all citizens irrespective of status are equal before the law even as the Rights group said Nigerians even expect the National Assembly to strike out section 308(1) of the constitution to remove immunity for executive arm of government. HURIWA wonders whether the Nigerian parliament is located in the outer space for the members not to have known that even recently in Great Britain the Prime minister Boris Johnson was dragged to Court by some citizens over the ways and manner that he shut the House of commons so as to foist his own kind of BREXIT on that session of the parliament and the British Supreme Court o overturned the closing of the House of comons by the controversial premier. HURIWA also expressed shock that the Nigerian law makers are oblivious of the near impeachment of the President of the United States of America who was subjected to trial just after the Democrats dominated Congress had voted to impeach him just as the civil society group said the development in the USA from where we borrowed the Presidential system of government should serve as CONSTRUCTIVE lesson to demonstrate that nobody is above the law in civilised societies.

In a media statement jointly authorized by the National Coordinator Comrade Emmanuel Onwubiko and the National Media Affairs Director Miss Zainab Yusuf, HURIWA said the attempt by the National Assembly members to cloth themselves with immunity from prosecution is a testament to the fact that the recently kick-started amendments to the constitution under the headship of the Deputy Senate president Mr. OMO AGEGE is a total charade and at best would amount to political shadow chasing and smokescreen.

“We are shocked that at a time the entire civilized world is opening up the political spaces and making political leadership a much more transparent activity in which the actors must abide by the tenets of full disclosures and respect the twin virtues of transparency and accountability the Nigerian National Assembly is busy making evil law that would turn their job to that of secret cult. The attempt to do that offends section 15(5) of the constitution which forbids the abuse of power by political office holders. The FREEDOM OF INFORMATION ACT is also a binding law which is against such dubious immunity clauses."

“Awarding themselves immunity from prosecution is a clear message to Nigerians that the bunch of legislators at the National Assembly have committed outrageous crimes that they do not wish that people should know or they are afraid of their shadows and are preparing for post-retirement FREEDOM from the necessary legal demands for accountability. Nigerians must stoutly oppose this unconstitutional attempt to introduce the dictatorship of legislators.”

“As human rights crusaders, we do not think that Nigeria should be drawn back to the medieval periods when kings and rulers are above the law and whereby tyranny was the order of the day. These National Assembly members had better been told to abolish section 308(1) instead of attempting to further cloth themselves with the capricious and wicked immunity from being tasked to give account of their stewardship.”

HURIWA recalled that a bill seeking to extend immunity to cover Presiding Officers of Legislative Institutions has scaled second reading in the House of Representatives.

The bill which was sponsored by Representative Odebunmi Olusegun was supported by the majority of the lawmakers who say it is important to safeguard the sanctity of the National Assembly.

In supporting the bill, Majority Leader, Ado-Doguwa said: “It should be passed for the simple reason that it provides protection for leaders of the legislature considering the important work of the legislature.

HURIWA applauded the few members who are opposed to this 'wicked parliamentary act of atrocious cover up " which the passage of such a satamic law would amount to.