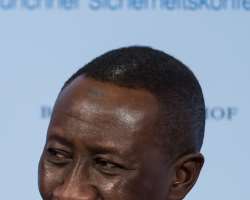 There has been diverse speculations of the whereabout of Major-general Mohammed Babagana Monguno, the National Security Adviser to President Muhammadu Buhari?

Nigerians showed concerns about the whereabouts of the 63 year-old retired general yesterday after he was conspicuously absent at two critical meetings in succession.

He was absent at the Federal Executive Council meeting last week Wednesday, which Buhari presided over. He was also absent at today’s meeting between President Buhari and the service chiefs.

President Buhari , his service chiefs and the vacant chair

In one of the photographs circulated about the meeting, there was a vacant seat as the military chiefs met with their commander-in-chief. Usually, the person the seat was meant for ought to have sat down before the president came in. But this was not the case before the photo session ended and the meeting began.

According to Daily Trust, Monguno was absent because he went to attend the Munich Security Conference in Germany, on behalf of President Buhari. According to the report, Monguno would return to Nigeria on Tuesday 25 February. However, the conference, in which French President Emmanuel Macron was a participant ended on 16 February. It started 14 February.

Some unconfirmed reports said the retired general has been told to keep off the Aso Rock Presidential Villa, as he was also reportedly stripped of the service of support staff from the various branches of the military.

The developments were triggered by the showdown Monguno had with the Chief of Staff, Malam Abba Kyari over who should coordinate the military service and intelligence chiefs.

In a now-famous memo he sent to President Buhari, Monguno complained about the hijack of his duties by the Chief of staff, a civilian and President Buhari’s foremost personal staff.

National Security Adviser Babagana Monguno discussing with President Muhammadu Buhari at the start of the FEC Meeting on October 26, 2017

“Chief of staff to the president is not a presiding head of security, neither is he sworn to an oath of defending the country,” an incensed Monguno, a retired major-general, said in the letter.

“As such, unprofessional practices such as presiding over meetings with service chiefs and heads of security organisations as well as ambassadors and high commissioners to the exclusion of the NSA and/or supervising ministers are a violation of the Constitution and directly undermine the authority of Mr President.

“Such acts and continues meddlesomeness by the chief of staff have not only ruptured our security an defence efforts but have slowed down any meaningful gain that Mr President has sought to achieve.”

Ordinarily, Kyari should have no role in security matters, but it appears, he has been playing the surrogate for President Buhari by holding meetings with the security chiefs, without the involvement of the official that they should normally discuss with.

There was no indication of how long this absurdity has been going on, but Monguno appeared eager to end the anomaly, hence his warning memo to all service chiefs to desist from taking further directives from Kyari.

The leaked memo now appeared to have backfired on his status within the Buhari administration.

Before his retirement in 2013 at the age of 56, the Borno-born Monguno had a stellar military career. He was Chief of Defence Intelligence from July 2009 to September 2011; and the Commander of the Brigade of Guards from 2007 to 2009.

He also served as the Chief of Logistics at Defence Headquarters and later as Commander of the Nigerian Army Training and Doctrine Command (TRADOC). He was also at one time Deputy Commandant, National Defence College.

Monguno was educated at King’s College, Lagos. He then went to the Nigerian Defence Academy and graduated as an officer cadet in the 21st Regular Course. Some of his mates were the late Alex Sabundu Badeh, a former chief of air staff and also chief of defence staff.

P.M.News learnt on Monday night, that he has not been re-appointed by President Buhari, by being issued an official letter.

Monguno is married to Nafisah Munir, the daughter of former Nigerian Ambassador to Turkey, Muhammad Lawal Munnir. He also has three children.