“Pregnancy must not be a death sentence, we are working on different interventions”
By KINGSLEY IGHOBOR 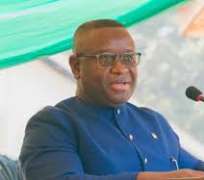 When Julius Maada Bio, 55, assumed the presidency of Sierra Leone in April 2018, the country was on a slow but steady rebound following the 2014–2015 Ebola epidemic.

Annual GDP growth stands at 4.8%. Buoyed by increased agricultural output and the resumption of iron ore production and export, Sierra Leone’s GDP growth should reach 5.4% in 2020, according to the World Bank.

Still, the 2019 UNDP Human Development Index, which ranks countries based on income, life expectancy, education and quality of life, among other indicators, placed Sierra Leone at 184 out of 189 countries. President Bio has acknowledged that there is much yet to be done.

Development strategy
At the centre of his development strategy, Mr. Bio told Africa Renewal in an interview, is investment in education, healthcare, empowering women and ending gender-based violence, and agriculture—aligning the strategy with the UN’s 2030 Agenda for Sustainable Development as well as the aspirations of the African Union’s Agenda 2063.

“My government has allocated 21% of the national budget to education,” Mr. Bio said, which is one of the highest such allocations in the world. “Pre-primary to secondary school education is now free, irrespective of gender, ability or ethnicity.”

In addition, he said his government provides “the students with core textbooks and other reading materials. We also provide free meals for student retention and for a balanced nutrition.”

Empowering women and girls
“We have expanded opportunities for girls by creating safe places in schools and by campaigning vigorously against early marriage and sexual and gender-based violence,” the president said.

As the same time, he lamented that the current maternal mortality rate is “unacceptably high.”

Sierra Leone has one of the highest infant and maternal mortality ratios in the world: 857 maternal deaths per 100,000 live births and 140 infant deaths per 1,000 live births, according to the UN Population Fund, the UN’s reproductive health and rights agency.

The government provides free health care for pregnant women. “We are working on different interventions targeting teenagers and adults,” said Mr. Bio. “Pregnancy must not be a death sentence.”

As well, Mr. Bio is working to tackle gender-based violence in his country, vowing that perpetrators will find no hiding place.

The president declared rape and sexual violence a national emergency in February 2019 after police statistics showed cases of rape doubling in 2018. This was followed swiftly with a law.

“We just passed in Parliament an act [Sexual Offences (Amendment) Act 2019] that makes punishment for gender-based violence much stiffer than before.”

The act stipulates up to 15 years in jail for perpetrators, including people who use positions of influence to sexually abuse or harass others.

The Sierra Leonean government’s agricultural goals include livestock development and diversifying away from rice production to what it calls the three Cs: coffee, cashewnuts and cocoa—all with the help of modern technologies. Rice is Sierra Leone’s staple food, cultivated by 85% of its farmers.