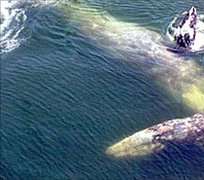 By Richard Black
Oil exploration plans in eastern Russia are a serious threat to gray whales in the area, say scientists with the International Whaling Commission (IWC).

The Rosneft company is due to begin a seismic survey around Sakhalin island within the next few weeks.

The IWC's Scientific Committee is “extremely concerned” about the plans and is calling for a postponement.

The gray whale population is critically endangered, with only about 130 animals left and only 20 breeding females.

Russia says it is aware of the problem, but the company's capacity to shift is limited for financial reasons.

The small area where the whales congregate has shallow water, and scientists suspect this is where mothers teach their calves how to feed at the sea floor.

The IWC's head of science, Greg Donovan, said the survey work was planned for the period “when there's probably the highest density of gray whales and particularly mother-calf pairs.

“The Scientific Committee is requesting them to postpone the survey until next year, and to do it as early in the season as possible when there are as few whales there as possible,” he told BBC News.

“We actually made a similar recommendation to another company, Sakhalin Energy; they have followed that recommendation and this year, they are carrying out the survey with a very detailed mitigation plan as early in the season as possible.”

The mitigation plan includes a provision that testing must stop if mother-and-calf pairs appear in the area.

Energy balance
Russia's IWC commissioner, Valentin Ilyashenko, said he accepted the scientists' conclusions, but there might be a problem in following through on its recommendations.

“Our government and minister of natural resources know this problem… and this question was discussed maybe one month ago,” he said.

“From my information, it's very difficult to start this work next year, because the work was planned last year and the money was in the budget for this year, and all equipment and the mothership is rented.

“It's very difficult to change that work but in any case, I know that our scientists and the staff of our ministers is working with this problem with this company.”

The International Union for the Conservation of Nature (IUCN) has been working with companies including Sakhalin Energy to minimise the impact on gray whales.

But Rosneft, reportedly, has appeared less interested in the issue.

Justin Cooke, a member of the IUCN panel, said that if the planned tests go ahead, there was a risk that mothers with calves could be driven out of their feeding grounds.

“This could have a crucial impact on this critically endangered population,” he said.

“We have some evidence of a slow recovery, but that would be jeopardised by serious disruption in their feeding grounds.”

The population has to recover and expand, he said, if its survival is to be assured.

Going south
The western grays spend the winters in breeding grounds further south, where another issue threatening their survival is entrapment in fishing nets.

Japan is trying to reduce this bycatch in its fleet through an education programme.

Fishermen are not now allowed to sell gray whale meat, and are asked to report entanglements so that authorities can release the whales.

Since the programme's introduction in 2008, there have been no reports of gray whales deaths through this mechanism.

This is one component of a comprehensive conservation plan drawn up by scientists from a number of countries and endorsed here by the IWC.

A key priority is to locate the breeding grounds, which are thought to be close to the Chinese coast – perhaps in a military zone.