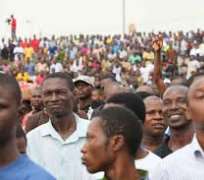 "A lady in Chicago was reported to have used hammers to kill flies. When asked why, she replied that she wanted to make sure the sucker was dead! –Ezeana Achusim

So...‘Scientists are wrong’, the Uruguayan writer Eduardo Galeano said with a warm smile on his face. ‘Human beings are not made of atoms; they are made of stories’. It is why we want to sing and draw, tell each other about our lives and our hopes, talk about the wonders in our lives and the wonders that we dream about. These dreams – this art – are what make us get up each day, smile, and go forward into the world. It is so common for human beings, even in the most wretched situation, to find a way to lift the spirit through our own forms of art. In Nigeria we seek refuge in God, pray about everything, blame everyone but ourselves soon we forget. And our art is to forget, painfully we forget and very quickly too.

Stories of death, brutal death, corruption, maladministration, and poor and in cases total lack of governance, and we carry on; we may never know the number of people that die everyday, until death takes someone you know.

30 killed in two Katsina Villages, 13 killed in Plateau communities, how about that attack for which the president visited Borno state. The University of Maiduguri girl that was burnt or the lad from Plateau state that was murdered.

We will forget that 11 members of the same family were locked up and burnt in their house in Kaduna by armed bandits who invaded their Bakali village in Fatika district of Giwa local government area.

We have a short fuse memory, preferring to largely forget very quickly from a point of learning slowly, we either never remember or we choose to totally forget.

Did we not forget Abacha and but for the fact that in the last few years he has remained an ATM, dispensing cash from his ancestral abode? Like I mean do we ever remember the labor of our heroes past as the anthem implores us to do.

We deplete our population through all forms of criminal brutality and leave grief in the wake, and after a while we forget. We forget those DSS officers that were killed by Ombaste in Nassarawa, all those killed and still being killed in Borno, Aadamawa, Plateau, Kaduna, Zamfara, Benue, are collateral damage, no memorial whatsoever by acts of omission or commission by us saying #neveragain.

Like Bola Ige, like Dokubo, like that dude in Lagos that wanted to be governor, political killings, ethno-religious killings, Zak Ibiam, Odi, Abia IPOB Killings, how about that lady in the Presidency that was brutally murdered because (official lines) she reported some yahoo boys to the police and they came to revenge.

We all soon forget, like we forget soon that Mr. Buhari was booed, and will still be booed again and again and we will forget. How many of us remember that University of Lagos lecturer and all that cold room stories, and the girls that were frozen in the cold room. The story is cold, done and dusted. We have forgotten.

We make all the noise, rabble and rouse but we forget, look at Auno village, in Konduga Local Government Area of Maiduguri Borno, over 60 people were killed, and women, children were raped and abducted by the insurgents.

They were attacked only 5 kilometers away from Maiduguri. According to eyewitness accounts as reported by The ICIR, “They came with six gun trucks for the first attack. Later 18 trucks joined them as reinforcement and they burnt and killed the passengers in the second attack.

“A woman was raped and her newborn baby’s head was crushed to death and later burnt her alive after her both legs were shot. An additional six ladies were raped in the process and taken away by the insurgents,” eyewitness report claimed.

It was also reported that no security reinforcement from Maiduguri showed up. According to eyewitness, only the Special forces from Benishek under One Officer Manga came forth and the officer was left with no support from other troops, leading to frustration.

Many cars and trucks carrying passengers were reported to have been burnt beyond recognition by the insurgents. The strange truth about this February incident is WE WILL FORGET by March...OUR MINDS WILL NUMB IT OUT!

Some ten years ago, 7 March 2010, more than one hundred Nigerians in Dogo-Nahawa village near Jos were killed. The attacks went on for four hours, and nearby villages were also targeted. The attackers fired guns to cause panic and as people fled chopped them with machetes. They set alight many of the buildings and left corpses dumped in the streets. Many of the dead were women and children, including an infant less than three months of age.

The state police command reported that 109 people died in the attack, including at least 38 children. A state official told journalists that more than 500 people were killed, while a plaque at a mass grave in Dogo-Nahawa states that 501 died in the massacre, and lists the names of 354 victims. WE FORGOT!

On 29 September 2013, gunmen from Boko Haram entered the male dormitory in the College of Agriculture in Gujba, Yobe State, Nigeria, killing forty-four students and teachers. On February 25, 2014, fifty-nine boys were killed at the Federal Government College of Buni Yadi in Yobe State, Nigeria. The twenty-four buildings of the school were also burned down as a result of the attack. No group claimed responsibility for the attack, but according to media and local officials, Boko Haram were suspected to be behind the attack..

The above is just to joggle our memory, I have left out the Chibok girls, the Adamawa hostel killings, and then someone who apparently have forgotten the victims of such killings, forgot that there are IDPs in millions, widows, and orphans who have no access to food, water and means of livelihood but remembered that an amnesty for repentant killers should be considered.

We make all that roaring of a grass eating goat, and then bark like a lion and soon we forget there was that car farm, owned by a former IG of Police, or those mint notes that Ribadu former corruption czar was allegedly given by a once upon a time governor. We soon forget the drama and all the episodes because not only does corruption fight back but also it comes as a Christian corruption or a Muslim corruption. We forget who stole what and when, all the seething anger and despair; we soon forget and compare evil for evil.

Ask Nigerians about that Rivers case of Supreme Court between Celestine and Rotimi Amaechi, they have forgotten, same way we will soon forget Imo and Bayelsa states and the ensuing hullaballoo.