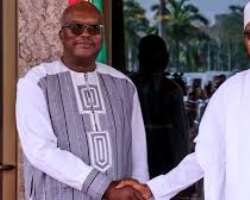 Nigeria President Muhammadu Buhari has said that the country has witnessed a decline in banditry because of the control of weapons smuggling since the partial closure of the border.

President Buhari said this on Friday while receiving President Roch Marc Christian Kabore of Burkina Faso who chaired the Economic Community of West African States (ECOWAS) committee mandated to resolve the issue of border closure at the Presidential Villa, Abuja.

The President called for more patience from neighbouring countries over the issue of partial closure of Nigeria’s land border to goods. He said the matter would be determined by the report of a tripartite committee made up of Nigeria, Benin and Niger Republic, restating that the decision to partially close the border was purely to safeguard national security.

“Our major problem is security – the inflow of weapons, ammunition and drugs. We have witnessed a decline in banditry using such weapons since the partial closure of the border. Also, our farmers are now able to sell their rice since we stopped the inflow of foreign rice, usually dumped in the country,” he said in a statement issued on Friday by his media aide.

President Buhari, who said Nigeria took cognizance of the concerns of neighbouring countries on the issue, said his administration would find an early and enduring solution.

“I will work as fast as I can as soon as I receive the report,” he said.

The President of Burkina Faso had earlier told President Buhari that he came on the visit, following the mandate of ECOWAS to resolve the issues that culminated in the partial closure of the border.

He said some of the challenges had been discussed, and agreed on, urging President Buhari to reconsider the position of Nigeria on the border closure.

In a separate statement issued yesterday, President Buhari reiterated that the country saved millions of dollars that could have gone into food importation.

The President, who said this while receiving members of Council for New Nigeria Initiative (CNNI) led by Senator Abu Ibrahim, stressed the need to invest more in agriculture to make faster strides as a nation.

“Those who went into farming have no regrets, and we now save millions of dollars that would have been expended on food importation.

“We are almost self-sufficient in food production, and that was why I told the Governor of the Central Bank that not even one cent should be given for food importation.

“We have got more people back to the land, employment is being generated, and we will do more of it,” he said in the statement issued by his spokesman, Femi Adesina.