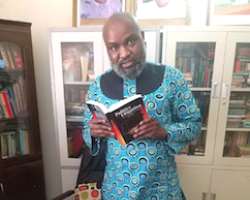 In his book “Political communication: Rhetoric, Government and Citizens,” Dan F. Hahn said something that is very fascinating and directly relates to the thematic issues that informed the writing of this brief reflection which is a look at what the Nigerian military needs most at these times of intense counter terror battles in the North East of Nigeria.

The author aforementioned, spoke about what he called “Functions of definitions.”

Reflecting through the whole gamut of what he presented as the functions of definitions, this writer progressively interrogated the groundswell of perceptions, misperceptiobs and misinterpretations in the public space of Nigeria with specific reference to how people evaluate the performances of the service chiefs who are directly leading the counter terror war. There's no gainsaying the fact that most Nigerians are genuinely worried that the war on terror has lasted for too long. However, those who are calling for the heads of the service chiefs have forgotten that the war on terror began very long before their appointments were effectuated by President Muhammadu Buhari who has consistently withstood an avalanche or indeed a tsunami of pressures to sack his service chiefs but has rather passed a vote of confidence on these war time Generals.

This is how the author under reference saw the functions of definitions:

“As I already have indicated, the overall function of definition is to control the societal dialogue. That is, all rhetors attempt to control the public dialogue by persuading others to see the world as they see it – to know as they know, to value as they value. It would not seem, at first blush, that definitions could accomplish all that, but they can – and do.”

“More specifically, definitions are like blinders on a horse: they focus attention on some aspects while blinding us to others. They identify what the societal problem is (i.e., what should be done): and that, in turn, helps identify who should act. They help to focus and thereby limit debates and, if successful, even entirely eliminate the need to debate.”

“Because most of us, most of the time, prefer to believe that the societal dialogues in which we are involved are about “truth” and “justice” rather than merely definitions it may be helpful to take a historic example rather than a contemporary one.”

Going forward, we will look at the good examples displayed by one of the best known war time generals that the world has ever known Winston Churchill and then we will conclude by doing a general appreciation of the role of motivational leadership styles of the leading military chief in the war on terror in Nigeria who is president Muhammadu Buhari’s appointed and trusted chief of Army staff lieutenant General Tukur Yusuf Buratai.

As we seek knowledge about the place and role of the iconic British best known leader, the best reference source is the British Broadcasting Corporation’s website and to it we will now turn to gain a bird’s eye view of the historicity of this distinguished war time motivational leader and then we will establish a nexus between his examples and what kind of motivational role the Nigerian Army chief is playing.

Churchill is one of the most famous Britons of the 20th Century, so echoes the British publicly funded Broadcasting behemoth reputed to ve one of the best nedia institutions globally.

BBC says Winston Churchill is one of the most famous Britons of the 20th Century and led the country during the Second World War.

He's a hero to many and his speeches are some of the most famous in history - there's even a statue of him outside Parliament.

He's credited as being one of the driving forces that inspired the UK to keep fighting against Nazi Germany.

But he also suffered with health problems and was a complicated person who said and did things that many people today don't like.

He was famous for his inspiring speeches, and for his refusal to give in, even when things were going badly.

Many people consider him the greatest Briton of all time and he's almost certainly the most famous British prime minister.

Before World War Two started in 1939, he had warned about the rise of Hitler and the Nazis in Germany.

Churchill's refusal to surrender to Nazi Germany inspired the country.

But he became prime minister again in 1951, before resigning four years later. My readers will see that the greatest of Great Britain came about by the kind of iconic leadership qualities of persons such as Winston Churchill. Such great leaders are also found in Nigeria. Also there is a nexus between the resilience of this British Icon with the motivational skills of Nigeria's current Army Chief Lieutenant General Tukur Yusuf Buratai who was discovered by President Muhammadu Buhari on assumption of office as elected civilian President. Nigeria's topsy turvy war on terror has thrown up the need for critical philosophers to analyse the place of motivational skills to the eventual victory of Nigeria over our adversarial armed rebels and TERROR suspects aligned with global jihadists movements of Islamic state.

I think the current terrorists attacks are as tragic and satanic as the attacks by the Nazis and the ambitions by Adolph Hitler to annex the whole of Europe, to become a world’s superman and to annihilate the Jews. These evil aspirations were clinically defeated by the allied forces.

The boko haram terrorists have not hidden their disdain for peace, territorial tranquility and social justice and have made their intention known to wipe out Christians and moderate Moslems.

The terrorists have made lots of incursions into some territories of Nigeria but the brave Nigerian soldiers commanded by a brave general in the same persona as Winston Churchill, has made phenomenal efforts to ensure that Nigeria does not fall into the hands of terrorists. We must commend our fighters even as we need to canvass for better fighting weapons and technical support from the global leaders to end this huge war.

General Buratai and his other fellow service chiefs have come under intense scrutiny.

These criticisms have come at a time that the terrorists have managed to strike at soft targets such as publicly executing hostages most of whom were abducted either on their ways to assist the internally displaced war victims or on their way to the university of Maiduguri. Even a very young female student of university of Maiduguri who is from Plateau state is still a hostage.

Leah Sharibu from Yobe State a Christian, who was captured when she was just 14 together with her other Moslem classmates, was held back even when others were freed and she has so far spent two years in captivity of boko haram terrorists.

These bloodsheds have come with the backlash of calls from some quarters that the service chiefs should be dismissed. The Army chief in the face of these challenges continues to show examples of a motivational leader.

Indeed, apart from better combat weapons, one vital commodity the combatants also need so as to successfully decimate the terrorists, is motivation and encouragement.

Nigerians must show solidarity with the leadership of the military and should stop the unnecessary bickering because these service chiefs appointed and trusted by the commander-in-chief, are doing all that they can to win the war on terror in good time.

They (service chiefs) are not war merchants because they have nothing to gain by destroying their nation- a Country that has given them the best things of life that most people are dreaming to have- good paying jobs and the finest academic scholarships that money can buy. They are patriots. They have attained the pinnacles of their chosen profession with one of them becoming a full fledged military General- thus becoming the only second person alive or dead wearing such a prestigious and meritorious rank in a nation of over 200 million people. Even if someone is a diehard critic, is there no room for objectivity?

The Army chief lieutenant general Tukur Yusuf Buratai is a leader who we have seen and heard directly from the theatre of counter terror war. He is not the type that will be ensconced in his Abuja heavily air conditioned and highly maintained office in the upscale area of Abuja- the most beautiful city in Africa.

He has been seen even serving Salah and Christmas foods to combatants in the battle fields.

He (Burayai) is often seen visiting his fighters to shower praises on them, to instill discipline where necessary and to inject a massive dose of motivational speeches and actions including awarding promotions to deserving combatants. Buratai and his appointing authority have visited wounded soldiers in hospitals to emphatize with them. How many of us shouting 'crucify them' has visited our wounded soldiers in the hospitals?

He General Tukur Yusuf Buratai recently took this motivational leadership style to a whole new level by authoring personalized letter to the fighters to motivate them and pray for greater commitments and zeal to finish the battles in very excellent way.

Tukur Buratai, chief of army staff, says he is confident that the troops in the north-east will end Boko Haram insurgency soon.

In a statement issued by Sagir Musa, army spokesman, Buratai also reminded the troops that they have done it before, and that “they will do it again without any foreign troops around”.

According to the statement, Buratai said this in letter to congratulate the theatre commander, sector commanders, super camps commanders, commanding officers, as well as the officers and soldiers serving in Operation Lafiya Dole for their gallantry.

In the letter, the army chief hailed the troops and their commanders for the display of courage and patriotism that led to the decimation of the leadership and ranks of Boko Haram insurgents and their affiliate ISWAP in various parts of the theatre.

He asked them to continue to dominate the theatre and maintain high standards of professionalism.

He also asked them never to allow the insurgents any breathing space or freedom of action anywhere as they continue to discharge their legitimate duties.

Buratai said he has foreseen that with the renewed zeal, it is just matter of days to end the menace of Boko Haram insurgents.

He said his confidence in total victory has further been rekindled by the determination of the troops on the ground.

“I am more confident now than ever before with your current robust posture that you will end the BHT/ISWAP menace in no distance time,” he said.

Dear compatriots, the greatest act of patriotism at this time is to support the military to win the war on terror and not to keep criticizing the service chiefs.