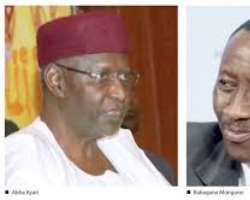 Gwandu was reacting to the face-off between the National Security Adviser, NSA, Babangana Monguno and Kyari over the coordination of the country’s security.

He urged Buhari to sack both Monguno and Kyari for being “greedy and selfish” in the discharge of their duties.

The former Aide-De-Camp to Buhari during the President’s military regime stated this while featuring on a radio programme in Kaduna.

Jokolo reminded both Kyari and Monguno that Nigeria was greater than any individual, hence they should remember that all was watching.

He said: “The misunderstanding between them was borne out of greed, selfishness, if not, these two are brothers. They are all Muslims and from the same tribe. President Buhari had brought them to assist him in different roles, why then should there be any conflict of roles?

“Truly, General Munguno had complained, but he did not refer his complaints to the right people. He should have written directly to President Buhari, on how he felt about his Chief of Staff. This is because Buhari tends to recognize his Chief of Staff as his ‘Deputy President.

“Buhari had said everything should be done through the Chief of Staff, this implies that Buhari has given him limitless power and he can do anything. But this is a misnomer.”

Recall that a circular from the office of the NSA had a few days ago alleged that Kyari had hijacked the coordination of security leadership in Nigeria.

In the circular, Monguno had alleged that Buhari’s Chief of Staff had sidelined him in making strategic decisions in national security operations.