Pa Cyril Igwe Laid To Rest In His Hometown, Ebenator

As Obiano, Others Commiserate With Family, Commend Deceased's Son On Road Construction
By Izunna Okafor 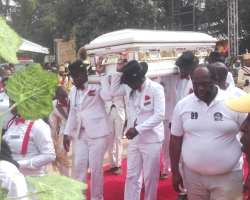 It was a moment of solemnity and a reawakening call to live with eternity in view, as the remains of Late Nze Cyril Igwe was committed to the mother earth at his residence in Ebenator, Nnewi South Local Government Area of Anambra State.

The apparently befitting burial which started with a Holy Mass attracted the presence of many dignitaries who came from different walks of life, within and outside the country, to pay a last respect to the deceased and bid him farewell too. In his homily during the valedictory mass, Very Rev. Fr. Dr. Benedict Okolo described death as inevitable for every mortal, and further argued that it had been so since the creation of the world.

He revealed that what matters most when one closes his eyes to death should not be the age at which the dies, his wealth or assets, the befittingness of his burial, nor other such worldly things and indices, but where the person's soul goes aftermath to spend eternity; as, according to him, reward inevitably awaits every soul, in accordance with his work in his lifetime. While praying God to accept and grant Nze Cyril Igwe's soul eternal repose in His kingdom; Fr. Okolo who dwelt more on Matthew 20:1—16 where a certain landowner rewarded his labourers in the evening, therefore charged everyone to use the short time he has on earth to serve God and humanity, given that no one knows when his own evening would come, after which judgement follows.

On his own part, Rev. Fr. Vincent Nnabude who is an indigen of the community appreciated one of the deceased sons, Chief Emeka Igwe for tarring a road in the community, which has now been named after the deceased, and which was recently commissioned by state's Commissioner for Works, Engr. Marcel Ifejiofor on behalf of the State Governor, Chief Dr. Willie Obiano. Responding on behalf of the deceased's first son, Nze Elias Igwe, the second son, Chief Emeka Igwe appreciated those who elicited both their time and resources to identify with them in such a period.

He also thanked God for the life of their father who he described as a hero and a truthful man with a heart of gold, reminiscencing their moments with him while on earth, and how he spent his lifetime touching other lives.

Chief Igwe who is both a philanthropist and human capacity builder further disclosed that his resolve to construct and tar up the said community road was not only aimed at igniting the fire of development or ameliorating the sufferings of the people living around the area, but was primarily aimed at consolidating and building on the legacies and footprints left behind by their father, who he noted, would always give his best when it comes to rendering selfless service to the humanity. Baring his mind on the deceased, an academian and Igbo oral poetry connoisseur, Prof. Sam Uzochukwu who also hails from the community said, "I knew Cyril in his old days in Onitsha; he was a very sociable man truly concerned with the development of his community; and since when he relocated to the village, he started playing more active roles in that regard. "Seriously, we are regretting his death; but all the same, we are happy that his children are following his footprint, as you can see by yourself, looking at the road they tarred and other such things they have done in the past. So I pray they continue to trail his path."

Tributarily, others who commiserated with the family, including the Traditional Ruler of the community, H.R.H. Igwe Chinewubeze Ezejibulu; the President General of the community, Chief Anthony Okechukwu; and the MD/CEO, Everyday Group of Company Ltd, Dr. Charles Dimnwaobi, affirmed that the deceased lived a purposeful and impactful life, even they pray God to console and enable his children to trail his path. Born in 1930 to the family of Nze and Lolo Dim Igwebum of Ebenator in Nnewi South Local Government Area, Late Nze Cyril Igwe was the only surviving male child of his parents. At the age of 89, he slept in the Lord on Sunday 10th November, 2019, after a brief illness.

Left to mourn him are his 2 wives, 13 children, 12 son/daughter-in-laws, 3 sisters, 3 cousins, 43 grandchildren, and 9 great-grandchildren.