How Not To Be A Royal Father 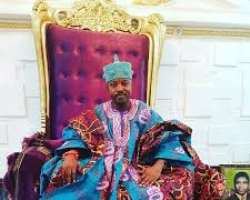 The Oluwo of Iwo, Oba Abdulrasheed Adewale Akanbi, is undoubtedly Nigeria's most stylish king. The 51 year old king who shuttles between Nigeria and Canada is a fashionista with swags. But in recent time, he has generated more than enough controversies for himself through utterances, actions, fashion and even relationship.

The latest in the series of controversies surrounding Oluwo is the assault on his colleague, Agbowu of Ogbagbaa, Oba Sikirulahi Akinropo at a meeting conveyed by Assistant Inspector General of Police, Bashir Makama. Oluwo accused Agbowu of calling him unprintable names, an allegation which Agbowu has denied.

I understand that some us by nature can be highly sensitive and react to minutest provocation. But when we are in a position that affords us with appurtenances such as the one Oluwo is blessed with, we must understand that it comes with responsibilities. Royalty comes with perks and drawbacks. That is why those God has blessed with such positions need not to be overly sensitive. A good king must be calm and show maturity at all times. He must be decisive and have personalintegrity.

He must be hard working, energetic, well spoken, able to protect and maintain order, bless others and acknowledge the efforts of other people. Those are few qualities of a good king. The recent show of shame by Oluwo is not only a mockery of Iwo people alone; it is a mockery of our existential reality as Yoruba people.

Ooni of Ife, Oba Enitan Ogunwusi once tasted the bitter pill of royalty when Oba of Lagos, Rilwan Akiolu snubbed his friendship handshake. Ojaja did not throw caution to the wind. He knew royalty sometimes has its drawbacks. Yorubas rose up in their thousands to condemn the Oba of Lagos. In the case of Oluwo who seems to have developed insatiable appetite for controversies lately, he became confrontational and even attacked another Oba who is also a representative of his people. I'm a great supporter of youths in position of power or authority and I believe that the future belongs to the youth.

Unfortunately, the youthful exuberance of Oluwo has developed into full blown rascality. How can a custodian of Yoruba culture and tradition behave like people in the medieval period? Has he forgotten the concept of ‘Omoluabi’ in the culture and tradition of Yoruba people? Oluwo should be sanctioned for desecrating his office as imperial Oba of Iwo. He must apologise to all Iwo sons and daughters whose his action has caused them humiliation one way or the other. And finally he must apologise to all Yoruba people.