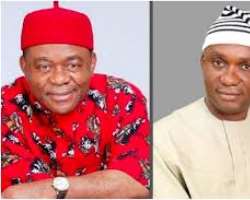 INTRODUCTION:
Abia State , so named after Old Aba and Old Bende Divisions of former Eastern Region during its creation in 1991, has an enviable vantage for growth and development sequestrating from abundant natural and human resource endowments. Everybody expected a quadruple in the tide of development which as it were , could have been harnessed from the deposit of eggheads in the State. Abia State is clearly the leading State in Igbo struggle, and so ,the cynosure of all eyes both in the East and outside. But ,as the vissiccitudes of life can always counter, the State has been comatose with all existential lachrymose of visionless leadership. The first salvo was the idiosyncrasy of mamacracy between 1999-2007. The second phase was a plunge into the abyss of lootmania by a man who was tooted to have debunked all allegations of fiendish oath taking for perpetual sawdusting of the coffers of the State treasury. Once beaten, twice shy, but T.A. oRJI could not exit from the ideological claptrap of leading the enviable State by the garden path, which leap in the dark snowballed into the unilateral pick of the present Governor from the South which is full of sound men to show the light, but who were contrariwise denied for a lackey as a bull in a China shop , to maintain the status quo. Thus, Abia State has been unfortunate from day one.

However, immunity covers the incumbent Governor whose time must necessarily come. On the other side Jordan were the two Governors whose rulership bespeak terrific life on cliff hanger as far as looting of Abia State Coffers is concerned. The descent to convolution is the recent ocean sink of fraud attributable to the T.A. Orji and his son Chinedum Orji to the tune of, far more than one hundred and fifty billion ( Far more than N 150 Billion ) naira loot. But Chinedum Orji is the incumbent Speaker, Abia State House of Assembly. That is the decoder, if it really is. But that is the irony because it really is. But that is that generating concern and build of synergy for this Communiqué because it is a grave pity to Abia State which fired all zest to comeby this Communiqué by concerned citizens of the State as they brainstormed on Abia Today and Tomorrow viz- a -vis T.A. cum Chinedu Orjigate. They categorically stated that :

1. EFCC should continue and quicken their investigation and subsequent arrest and prosecution of Chinedu and T.A.Orji.

2. Chinedu Orji should immediately stepdown from his position as the Speaker of Abia State House of Assembly pending the outcome of his investigation.

3. The processes of RECALL should be kickstarted against T.A. Orji and his son Chinedum Orji.

4. ALL the Recovered loot from both T.A. Orji and Chinedu Orji should be expeditiously returned to Abia State Treasury from where they were looted in the first place. This means that Federal Government Treasury has no modicum of right to receive the money recovered from Abia State.

5. The status of T.A. Orji and his son Chinedu Orji as well as Orji Uzo Kalu , should be extended to ALL other former Governors as well as affirmed looters of different states' treasuries in all other geo- political zones of the Federation, irrespective of religion and social standing , for justice to be felt and seen to be done .

6. The incumbent Governor, Dr. Okezie Ikpeazu , should clearly step up his work in Abia State, while take a bold step to disentangle from the claws and jaws of T.A. Orji to focus on developing Abia State exclusively.