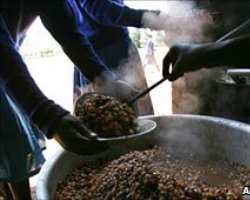 Kenyan businesses have warned that new price-fixing legislation will cause job losses and food shortages.

MPs passed the bill on Wednesday giving powers to the finance minister to set maximum prices for basic goods like maize and fuel following price hikes after last year's drought.

It is a move away from the free market approach which Kenya has followed for the last 20 years.

The president will have three weeks to decide whether to approve the bill.

Five-year jail term
The BBC's Peter Greste in the capital, Nairobi, says when a severe drought drove up the price of basic commodities like flour, sugar and fuel across the country last year, the government came under intense pressure to stem inflation.

But parliament's solution has been condemned by industry and economists alike, our reporter says.

With the end of the drought, inflation has settled to a respectable 3.9%, he says.

Analysts like Samuel Nyamdemo from the University of Nairobi's School of Economics say price fixing will only create long-term problems.

He argues that it will force the government to control prices of farm inputs like seed and fertiliser as well, and encourage farmers to move away from those artificially cheap commodities, creating serious shortages.

Manufacturers too say it will encourage factories to move elsewhere, just as Kenya is about to enter the East African Economic Community.

“We are going back to the era of shortages or commodity diversion,” Kenya Association of Manufacturers' chairman Vimal Shah told Kenya's Daily Nation paper.

“If a manufacturer finds the cost of inputs too high, he will simply close shop until they come down or sell his products to countries which have no price controls,” he said.

But Kenya's President Mwai Kibaki is himself an economist and may return the bill, which has penalties of up to five years in jail for anyone breaking the rules, to parliament.

Given that Kenya is pushing for trade liberalisation at the World Trade Organisation talks, sending the bill back looks likely, our reporter says.