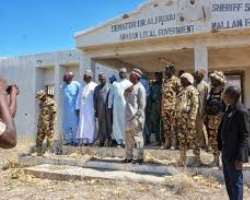 Governor Professor Babagana Umara Zulum of Borno State seems not to be tired and has made it again Weekend when on Saturday 15th February, 2020 he was at Malam Fatori, the headquarters of Abadam Local Government Area located at the extreme border area of Northern part of Borno State at the shores of the Niger Republic of the Lake Chad, region which was held for long by Boko Haram insurgents.

Abadam LGA is located 5 km away from Bosso Province of Niger Republic where its headquarters, Malam Fatori ,remained stronghold of Boko Haram terrorists at the peak of the Insurgency in 2014 and no go area before it was recovered by the gallant troops of the Nigerian military.

During the visit, Zulum undertook an assessment of destructions effected by the Boko Haram insurgents on public and private biuldings among other structures.

Governor Zulum addressing journalists on his entourage immediately after completing inspection and visitation at Malam Fatori town, he assured that Borno State Government would fast track the reconstruction of Malam Fatori to the pave way for the establishment of civil authorities.

Governor Zulum also commended the efforts of the Nigerian military in restoring peace in Borno State.

"I commend the effort of the Nigerian military, for the past six years they have never been defeated by anyone" Zulum said.

Governor Zulum is the first civilian to visit the town, since it was liberated. Places visited by the Governor includes; Local Government Secretariat complex, Primary and Secondary Schools among others.

Prof. Zulum was accompanied in the tour by the Speaker, Borno State House of Assembly, State Commissioner of RRR, Local Government and Emirate Affairs, some Members of the State Executive Council and other government officials among others.