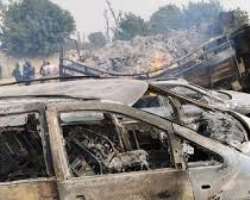 The delegation which was in Auno town under tight secuirty by the military, RRR squad, SSS, Civil defence , CJTF and Vigilante Hunters also inspected some destroyed structures and vehicles which some were still burning as at 1.3 pm Thursday since Sunday night.

The Humanitarian Minister, Hajiya Safiya Umar Farouk said she was directed by President Muhammadu Buhari to lead a federal government high powered delegation to come over to Auno and deliver his heartfelt condolences on behalf of all Nigerians.

She added that the President assured that his government was doing everything possible within the mandate of the presidency to end the insurgency and restore permanent peace in the state and north east at large while praying for the repose of the souls of those that lost their lives and quick recovery to those that sustained various degrees of injuries.

The Minister further said that her ministry in Collaboration with the NEDC and other relevant authorities will assist them, particularly, th victims of the Boko Haram's last Sunday attack, stressing that, already her ministry and NEDC have directed for the comprehensive list of the victims affected with a view to support them.

She prayed for the return of permanent peace and God's Protection while assuring the Community of continuous support to alleviate their sufferings.

The Managing Director, NEDC, Dr. Alkali appealed to them to exercise some restrain and consider what happened as an act of God while assuring them that the commission will intervene to provide succour to their plight.

He prayed for continuous peace and secuirty in the area .

The NEDC Board Chairman, Major General Paul Tarfa said he can not say anything more than what the Minister and MD have said but only to appealed to them to bear the irrepressible loss and consider it as act of God.

He reminded them that the President has delegated them to come and sympathize with them on his behalf and Nigerians while urging them to bear the loss and continue to be patient.

The Board Chairman also assured that the commission will support them in recovery from the attack.

Responding, the District Head of Auno, Alhaji Abba Ana's Umar thanked them for the visit and said that he was also with the President on Wednesday at the Shehu's palace.

He prayed God to give them the strength and will to continue to serve humanity while noting that in recent time, Auno village was attacked 6 times which led to the disperse of the residents leaving only a few behind .

The traditional ruler said the problems associated with the Insurgency are enormous and have exposed them to severe hardships and sufferings while praying for the peace and stability in the area and state.

The State Commissioner of Reconsttruction Rehabilitation and Resettlement Engineer Mustapha Gubio on behalf of the state government thanked them for the condolence visit and promised that all structures destroyed are going to be reconstructed .