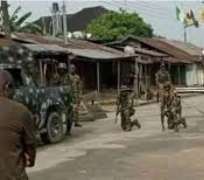 It has come to the notice of Igbo Mandate Congress by agents within the security agencies, particularly the army and police and also from IPOB that the burial of Nnamdi Kanu’s parents slated for February 14th will be turned to a theater of war.

The Police had issued dangerous provocative statements and IPOB have replied provocatively. All these statements at the expense of sacrificing Igbo blood during a key burial event.

Nnamdi Kanu in his latest broadcast had threatened as stated below;

“All of you including Buratai, all your children will be killed. Every police commissioner, commanders, give me the addresses, I am giving you an order, get me their names. I will kill them if they kill anybody in my home town on the 14th of February, leave us alone, we are not armed.

“If you come to my parents’ funeral and shoot, we will kill all your children, if you like go and hide them in Saudi Arabia, we will find them and kill all your children. You will know what it means to buy a casket, your names will be wiped out. I will submit myself for arrest after we kill them.”Nnamdi Kanu cannot kill Buratai and all his commanders, he doesn't have the capacity to get all the children of these military commanders if they attack any IPOB member in Afaraukwu,as he claimed in recent broadcast, without the cooperation of certain elements within Biafra. These elements are never going to help him get at anybody because of abusive tendencies.

Igbo Mandate Congress wishes to forewarn those going to Afaraukwu for the burial of Kanu's parents to either behave themselves within the ambit of the law of Nigeria or prepare for total war against the Armed Forces fully kitted with their own weapons of mass destruction.

Enough blood has been shed over the nation already and it is always the innocent that are affected.

Igbo Mandate Congress advises the earlier option for visitors to Afarukwu because Nnamdi Kanu has no capacity to extract any revenge on their dead bodies from Nigerian military authorities and all their numerous commanders and their families hidden all over the world. Goading innocent people to death again is a bloodshed too many in Biafraland.

Igbo Mandate Congress advises the Buratai led army should know that the Afaraukwu people want to bury their leader in peace and should act responsibly without causing any act of provocation. Many dignitaries coming for the all-important burial, wants respect for the dead. The army should behave themselves.