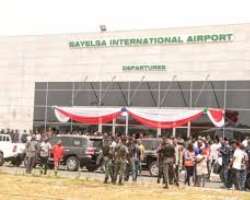 There are two schools of thoughts concerning assessment of the performance of the outgoing governor of Bayelsa State, Henry Seriake Dickson in the eight years of his tenure. One camp seems to drop sentiments and takes the position that the administration has legacy projects that would remain indelible footprints in the sands of times.

The other camp, referred to as critics even by the outgoing governor who feels such persons do not mean well for the state, thinks otherwise.

A don and politician, Prof. Steve Sinikiem Azaiki, pitches his tent with the first school of thought, wherever he has the chance, and this he did again, when he mounted the podium at the commissioning of the Bayelsa State International Airport.

Prof. Azaiki is of the strong opinion that although the works of the outgoing governor are appreciated by many patriotic persons today, the future generation, would even be fairer to Dickson, the outgoing governor, because the fruits of his infrastructural developments would continue to be enjoyed by the people.

To buttress his argument, Prof. Azaiki spoke in glowing terms about the educational institutions established by the Dickson administration, stressing mostly the University of Africa, Toru-Orua and the Medical University in Yenagoa, all of which he wants retained and even improved upon by the in-coming government.

Azaiki, a representative of Yenagoa-Kolokuma/Opokuma Federal Constituency in the House of Representatives, pointed out that Bayelsa can never be said to have had too many universities, stating that some states even have more than Bayelsa, thus the additional universities and other schools established by the outgoing governor, should be appreciated as means for more development.

According to Azaiki, Bayelsa has been sending students abroad to study medicine, right from the time of Late Governor D. S. P. Alamieyeseigha’s era when he as secretary to that government, took 200 youths to Russia to study medicine. He rejoiced that, the medical university in Yenagoa would now train doctors for the state, and also boost health care, haven commenced with 300 students this year.

Speaking on the airport project, Azaiki who said he has used more than 82 foreign airports and nearly all local ones in Nigeria, described the facilities, especially the runway as among the best, adding that, the airport was one of the hallmarks of the Dickson administration, that would endure, and even future generations would appreciate.

He dispelled insinuations that the airport was not a necessity to the state, pointing out that an airport was a necessary infrastructure and complementary part of the features in a state or major city, thus Bayelsa needed to have its own like its counterpart states in the country.

“If airport is important but not necessary for Bayelsa State, as argued by critics, why shouldn’t we have ours to, for instance, receive a visiting president to our state? Or why should we not have it to enable our visitors fly in? Or why should we or visitors go to Rivers State and Imo State to board aircraft?” Azaiki asked rhetorically to the applause of the elated crowd.

He added that the airport was another avenue to open up Bayelsa State to tourists, multinational oil companies and other investors keen to have dealings with the state and the people.

“This airport project was dreamt of by my late boss, Chief D. S. P. Alamieyeseigha. As secretary to the state government, each time we went to Amassoma, his home town, by speed boat, he would say, there ought to be an airport on this very location, to fly to his place, and for Bayelsans to easily fly out”, the lawmaker recalled. “Today, I remember his dream, and I am happy that Governor Dickson has brought that dream to light”, he added.

Most delighting is the naming of the 2.5 Kilometer road leading to the airport, after the late governor Alamieyeigha, Prof. Azaki, stated, and lauded the outgoing governor, Dickson, for doing so to further immortalize the late leader.