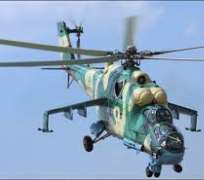 The Nigerian Air Force says it has neutralised some key Boko Haram terrorist leaders at Alafa Yagayaga on the fringes of the Sambisa Forest in Borno State.

NAF Director of Public Relations and Information, Air Commodore Ibikunle Daramola, who made this known in a statement on Monday in Abuja, said the operation was conducted on Saturday.

Daramola explained that this was achieved on February 8 when fighter jets dispatched by the Air Task Force of Operation Lafiya Dole obliterated a compound in the settlement where the leaders had assembled for a meeting.

“The airstrike was executed on the heels of credible intelligence reports indicating that the BHT leaders had converged at the target compound for a meeting over the weekend.

“Intelligence, Surveillance and Reconnaissance missions, which confirmed the meeting venue, also observed several BHTs in and around other buildings in the vicinity of the compound.

“Bombs from the detailed attack aircraft scored accurate hits on the target leading to the obliteration of the compound and surrounding structures as well as the neutralisation of their BHT occupants,” he said.

Daramola said NAF, operating in concert with surface forces, would sustain its air campaign to shape the battlespace in the North East for the effective conduct of further ground and air operations.