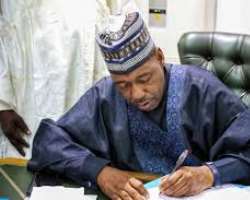 The Ohanaeze Ndigbo, Borno state chapter, has commended the governor of Borno state, Professor Babagana Umara Zulum for the accelerated promotion and cash reward to one of its own, Mrs Obiageli Mazi ,whom the governor promoted from class teacher to Assistant Head Mistress.

Addressing newsmen in Maiduguri on Sunday over the governor's gesture, the president of Ohanaeze Ndigbo , Borno state, Mazi Uche Chris Azubuko, noted that this is not the first time, Professor Zulum would be demonstrating his detribalised attitude to governance to Ndigbo residing in the state .

Mazi Azubuko said at the demise of one of its son, Prince Okwudili Ezechukwu in Maiduguri, the governor apart from donating the sum of N1million to the bereaved family, delegated some of his commissioners to Anambra state, the home town of the late Prince Ezechukwu and as well offered scholarship up to the University level to the surviving children.

He said the entire Igbos in Borno state are indeed grateful to governor Zulum for uplifting Mrs Obiageli Mazi, adding that the quality and style of Zulum is what the nation requires for unity and progress.

" We the entire Igbos in Borno state are happy with his Excellency, Professor Babagana Umara Zulum for touching the life of our sister by rewarding her hard work and sincerity which the Igbos are known for," Mazi Azubuko said.

He described the governor as a rare gift which God has given Borno, noting that despite the Boko Haram insurgency, Zulum has been surprising the citizens through his people oriented programmes and policies that has been healing the trauma of the insurgency.

Governor Zulum during an outing at 6:30 am on Friday to assess facilities at Shehu Sanda Kyarimi Primary school under Jere local government area had encountered Mrs Obiagelli already waiting for her pupils.

Overwhelmed by Mrs Obiagelli’s dedication, Governor Zulum commended and rewarded her with personal cash of N100,000 nearly three times her monthly salary of N35,000 and later approved an executive order promoting her from class teacher to assistant headmistress.

Mrs Obiagelli, a level 12 class teacher before the promotion, hails from Abia state in the South-East and has been teaching for 31 years in Borno State.

Governor Zulum had directed the executive chairman of Borno State Universal Education Board to review the woman’s civil service position, her qualification (which happens to be NCE) and recommend her promotion.

Dr. Kullima said that even though the woman was not a graduate, her 31 years teaching experience and commitment coupled with an executive order by the Governor have earned her the promotion.

The governor had posted a video of his interactions with the dedicated Igbo woman serving in Borno with a strong message of appreciation. He wrote: “Yesterday, as early as 6:30 in the morning, I paid an unscheduled visit to Shehu Sanda Kyarimi II Primary School to see how we can improve the infrastructure therein and I met a teacher, Mrs Obliageri Mazi, an Igbo Christian from Abia State who has served for 31 years in the Borno state.

“Although it was very early, I met none of the teachers and their pupils on the ground but only her.

“Her gender, tribe, religion or state of origin does not surprise me but her passion, enthusiasm, dedication, commitment and above all patriotism do surprise me a lot.

“As a Government, we are mightily proud of her", Zulum said.