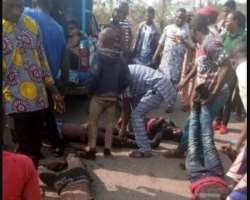 Six persons died in a motor accident along the Eripa/Otanayegbaju road in Boluwaduro Local Government of Osun state on today while returning from their church programme.

The Nigerian Voice gathered that the lone accident involved church bus convening pilgrims who were coming back from the Oke-Maria prayer centre.

It was learnt that the bus convening the worshippers lost control and tumbled. Six persons lost their lives while nine of the occupants of the bus including the Reverend Father that drove sustained serious injury.

Personnel of the Federal Road Safety Corps (FRSC) Osun State Command arrived the scene on time, rescued the victims and evacuated the deceased.

The FRSC Sector Commander in the state, Mr Peter Oke confirmed the death of six persons. He said three died on the spot and another three died later.