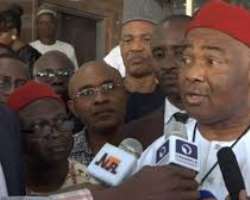 The appointment which was announced by the Secretary to the Government of IMO State, Chief Iwu has the following as the Chairman, Secretary and members;

Hon. Nkechinyere Ugwu - Chairman
Innocent Eke - Secretary
Brenden Njenje - Member
Mrs. Julie Egbo - Member
Okechukwu Onwubu - Member
Inaugurating the Management Team last Thursday at the Exco Chambers, Imo State Government House, the Governor represented by the SGI mandated the committee to revamp & rehabilitate the already dilapidated hotel with a view of repositioning the hotel to generate revenue for government. He urged the Chairman and her team to freely work out modalities that shall foaster total restoration of Imo Concord Hotel as a cultural tourist center.

In the Inauguration ceremony were the Chief of Staff to the Governor, Sir Nnamdi Richard Anyaehie, the Secretary Caretaker Committee of the All Progressive Congress, APC in Imo state, Dr Love Ineh, Pastor Chukwuma Ikeaka and a host of other party stalwarts.

Reacting shortly after the formal inauguration, the Chairman of the Management Committee who was handed over the Terms of Reference/Operational Guidelines expressed optimism in the Management Team's capacity to discharge their duties assiduously to meet the high confidence reposed in them by the Governor.

Lady Hon. Nkechi Ugwu and her Management Team were asked by the Governor to start work at Imo Concord Hotel with immediate effect.

However, the appointment of this team has generated some mixed reactions in the state with people countering the move by the government to appoint politicians to man the hotel.

Mr. Nwakamma, a Senior Lecturer in the Federal University of Technology Owerri who expressed his views on social media said that; government ought to have no business doing business, meaning that with the appointment of over 90% politicians to handle the hotel, Imo people should not expect much from the management team.