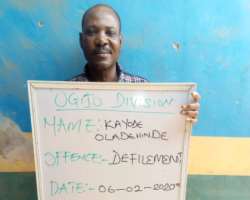 A 50-year-old man, Kayode Oladehinde who was arrested for defiling a 13-year-old girl today put on happy face when he was paraded for his offence.

Kayode who resides at Olope street, Ogijo was arrested by men of Ogun State Police Command for defiling the girl who his stepdaughter.

The mother of the girl said Kayode who is her current husband forcefully had sex with her daughter.

The woman said the her husband impregnated her daughter and gave the girl drug for abortion. She said girl took the drugs and started bleeding seriously.

The matter was reported to police at Ogijo police divisional headquarters. The DPO Ogijo division, CSP Suleiman Muhammad detailed his detectives to the suspect's residence where he was promptly arrested.

During interrogation, the suspect who was dumbfounded put on a with smiley face.

When confronted by his wife, the man pleaded for forgiveness from his stepdaughter.

The commissioner of Police in the state, CP Kenneth Ebrimson ordered the transfer of the suspect to Anti Human Trafficking and Child Labour Unit of the State Criminal Investigation and Intelligence Department.

The Police Public Relations Officer for the command, DSP Abimbola Oyeyemi said the suspect would be prosecuted after investigation.