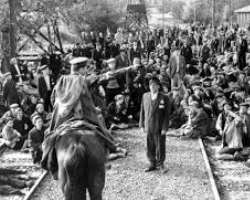 “And the Lord shall bring you (Jews) into Egypt again with ships ….and there ye shall be sold unto your enemies ….and no man shall buy you.” Deuteronomy 28:68

“Now will he (the Lord) remember their (Jews) iniquity, and visit their (Jews) sins: they (Jews) shall return to Egypt.” Hosea 8:13

These quotes, taken from the Old Testament of the Bible, follow in the normal but rare tradition of preceding what should ordinarily be literary exercises by religious quotes. In this particular instance, the quotes, if anything, serves to explain and reinforce the criminal land-grabbing policy of the Israeli establishment, the raison d’etre of which is lost on many.

The world recently commemorated the 75th anniversary of the holocaust, the so-called final solution which the Nazis alleged visited on Jews. As usual, the world displayed an unlikely entente cordiale before, during and after the commemoration. Ordinarily, that is the way it should be except that, even before images from Auschwitz and Jerusalem disappeared from television screens, Donald Trump, the cantankerous American president rolled out a Middle East Peace Plan that rolled back the modest progress made in the restive region.

It may never be known why President Trump chose to roll out his plan at the time it did. Whatever the case, it was careless of Trump to play down the ongoing holocaust which Jews are visiting on their Palestinians cousins at a time the world condemned Nazi crimes against Jews. In one fell swoop, Trump shredded all United Nations resolutions on Palestine and several Middle East peace accords, among them, Camp David and Oslo.

Trump’s plan, morbidly termed the final solution, virtually turned occupied Palestine into one big prison, endorsed continued appropriation of Palestinian lands and gave the thumb-up for unrestrained slaughter of Palestinians. It is all in the queer belief that “the only good Palestinian is the dead one!” Since Israel officially came into being in 1948, the unadvertised goal of stiff-necked Jewish leaders and their clappers has been to shatter the alleged record set by Adolf Hitler. Strangely, a complicit world keeps goading Israel on!

All these are coming at a time world powers claim they are increasingly united against forces of terror and darkness. Hypocrisy is winning and, as usual, America and the West are basking in their warped victory. Basking from a one-directional backing of Trump’s unregenerate policies, hawkish Israeli prime minister, Benjamin Netanyahu, whose country has been responsible for most of the violence in the world, has been grinning from ear to ear.

But the culture of silence has never always been infectious. At the other side of the divide is Iran and a few Muslim and Palestinian organizations that have been consistent in their condemnation of what they consider the annual ritual commemoration of a hollow cause. But as has always happened, they have had their shrill cry of condemnation drowned in the global display of hypocrisy.

Under normal circumstances, any act of great destruction and loss of life, such as the genocide (in Rwanda), ethnic cleansing (as in Bosnia Herzegovina and Myanmar) apartheid (in white minority-ruled South Africa) and the senseless Jewish discriminatory practices (in occupied Palestine) qualify to be referred to as holocaust. Strangely, the word holocaust is rendered hollow in its restricted application as it is exclusively and, hypocritically, employed to refer to the alleged incineration of six Jews in concentration camps.

May be Adolf Hitler was wrong but the way the descendants of his alleged six million victims behave in the Middle East, one is tempted to ask, at the risk of being dubbed anti-Semite: was Hitler right? This question will continue to excite in view of the unspeakable and despicable atrocities committed by Jews in occupied Palestine. Little wonder that, despite effort to criminalize holocaust-denial, Palestinians and their American and European sympathizers desist from criminalizing and animalizing Adolf Hitler.

No holocaust or ‘Final Solution’ ever worked! And the proof of this could be found in successive Israeli offensives in occupied Palestine that laid bare the vulnerability of the overrated Israeli Defence Force, IDF. For instance, whatever air of invincibility the IDF enjoyed has evaporated in the face of resistance from Hamas and Hezbollah (Hizbullah; Party of God) and other anti-occupation groups! While world powers continue to turn the blind eye, extremist groups, many of them trained by the United States to ‘contain Soviet expansionism’, have grabbed the initiative.

The struggle for the creation of Israel was not a tea party nor was the state birthed by United Nations resolutions. Rather, it came through the barrel of the gun! Pioneer Israeli terrorists such as Chaim Weizmann, David Ben Gurion and their ultra-right fellow travellers in World Jewry took up arms, organised themselves into terrorist groups and spearheaded the worse form of terrorism in their quest to secure a home!

It was the bombing spree of Jewish terrorist organizations that led to the creation of Israel in 1948.

Palestinians have been told they have no option but to fight. The way things are, Palestinian resistance groups and their sympathizers, long opposed to the concept of a two-state solution, feel fulfilled and justified in their wrongheaded struggle to wipe Israel from the face of the earth! Reason? American Middle East policies provide the tonic they need to fight. In fact, for every Hamasand other militant Palestinian group the world knows today, the Jews had their terrorist Irgun and Zvaiterror machines. They are doing for the Palestine what Zvai and Irgun did for Israel.

As good students of history, Hamas and allied radical Palestinian groups are aware that no amount of hours spent around tables would give them a home! They know too well that had Jewish terrorists such as Chaim Weizmann and David Ben Gurion and their land-grabbing descendants fallen for the sweet talk of the West, Jews would still be wandering in Europe, and not as lords of the manor in the Middle East. If Palestinians fail to emulate their fighting Jewish cousins of the early and mid-20th Century, they should just as well forget about a Palestinian homeland!

Let the world continue to believe that Palestinians are an unformed people and continue to see Jews are a special breed. Fine! It does not even matter that some western countries see holocaust denial as a major crime and refuse to apply the word to victims of Israeli discriminatory practices against their Palestinian cousins. What does matter, at the end of the day, is that it amounts to a hollow cause to commemorate one holocaust and turn the blind eye to another!