We Can Prevent Corruption Instead Of Fighting It - Rochas 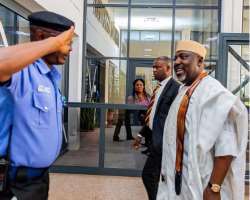 The Senator representing Imo West Senatorial District in the Nigerian National Assembly, His Excellency Owelle Rochas Okorocha has advocated preventive measures against corrupt practices in the Nigerian public service and among public officials. The former governor of Imo State argued that; "It is cheaper and more effective when government takes actions that could discourage corruption, thereby preventing it from taking place in the place."

The multi-billionaire philanthropist, leadership icon and mentor to thousands of youths, made this known while contributing to a debate during plenary on the floor of the Senate on Thursday, 6th February, 2020.

Expatiating on this later, Senator Okorocha argued that; "fighting corruption is a lot more expensive and more difficult than preventing it. He however commended the anti-graft agencies in the country, especially, the Economic and Financial Crimes Commission (EFCC) and the Independent Corrupt Practices Commission (ICPC) for raising the bar in the fight against graft in the country.

"Fighting corruption is a tedious and sometimes dangerous task. But for whatever it is worth, we cannot and should not condone corruption. We must take more creative approaches to reducing corruption to the barest minimum."

Some of the preventive measures suggested by the APC national leader are;

STRENGTHENING PUBLIC INSTITUTIONS: Okorocha argued that when institutions of government are equipped enough to run according to the provisions of laws establishing them rather than on the whims and caprices of their chiefs executive, then corruption would have been drastically reduced. According to him; "People should be afraid of the law rather than being afraid of chiefs. When the law is implemented in institutions, then, people would be held responsible for their actions according to the law, no matter how highly placed or how highly favored.

IMPROVING WELFARE OF PUBLIC SERVANTS: Senator Okorocha also advocated for an improved remuneration for public servants. According to him; "While we can make no excuses for anyone who is corrupt, we can reduce incidences of corruption in public service by ensuring that public servants receive better remuneration. The temptation to steal may be higher among public servants whose wages may be low than among those who receive what could be regarded as 'living wages.'

MORE DISCIPLINED AND HONEST PEOPLE SHOULD GET INVOLVED IN POLITICS: Getting more people with integrity into positions of power will go a long way in reducing corruption in the country. He called on those with integrity to stop running away from politics, but to get more involved in the political leadership of the country. "We need more good people in government, we need more people of integrity to take up sensitive positions in government. For instance, President Buhari's personal integrity is responsible for 50% of the success recorded in the fight against corruption in Nigeria in the last five years."

TECHNOLOGY: He also pointed out the use of technology as crucial in preventing corruption. Making reference to the successes of ippis, bvn and other recent policies of the government in reducing incidents of corruption, he advised that more of such innovations should be pursued by government to stop corruption in the system. "There is no doubt that IPPIS, BVN and other innovations like them have gone a long way in reducing incidents of corruption in the country, and the good thing about these innovations is that they prevent corruption from taking place in the first place.

Recall that as the governor of Imo State, His Excellency Senator Rochas Okorocha took deliberate steps to plug wastages in public service and drastically reduced corruption. The National Bureau of Statistics in a recent survey rated Imo under him, as the least corrupt State in the country.