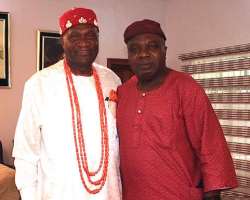 The OPC President and successor of Late Dr Frederick Fasehun whose wife hails from Akpugo in Enugu State met with the 9th President-General of Ohanaeze Ndigbo at a private location in Enugu city. According to reports obtained by The Nigerian Voice, the meeting which lasted for over one hour was held behind closed doors. The OPC leader was accompanied by Alhaji Mudashiru Adeniji (Eni Olorunda), National organizing Secretary of the organization and Odunayo Ogunmoye, the National Cordinator.

Emerging from the meeting, the OPC leader told our reporter that he met his in-law and President General of Ohanaeze Ndigbo to discuss issues of mutual importance. Aare Prince Osibote is a holder of several Igbo Chieftaincy titles who is seen by the Igbos as a reliable bridge builder.

Meanwhile, plans are on schedule to celebrate the Founder and former leader of OPC, Late Dr Frederick Fasehun in an inuagural memorial lecture that will feature distinguished Yoruba sons, daughters and other Nigerians.