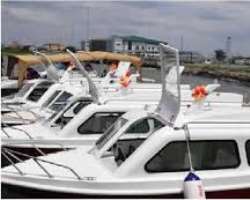 Being a megacity and emerging smart city, it is quite obvious that efficient traffic management can best be experienced in Lagos State if the three modes of rail, road and water transportation are effectively integrated to complement one another. Commuting the over 20 million people of Lagos State largely on the road has, thus far, proven complicated.

Lagos is the undisputed economic nerve center of West Africa, with every potential to become the 3rd largest mega city in the world after Shanghai and Mumbai. Today, many mega cities of the world depend on diverse mode of transportation for socio-economic growth and development.

For obvious reasons, Lagos has great potential to develop its water economy to a highly competitive level. If this is done, fishery, tourism, water transportation and the likes would immensely benefit. Since twenty-five per cent of the state’s landmass consists of water body, it is, therefore, not surprising that the present administration in the state is poised to put in place the right strategies that will make various water related enterprise in the state flourish significantly.

A few days ago, the state government formally kicked off commercial waterways’ transportation with the official launch of eight newly acquired speed boats. All the boats are built with comfortable seats, in-built Wi-Fi and modern technological devices that will aid smooth operations and safety.

The design and fabrication of the new boats were totally worked out by two local boats manufacturers in line with Sanwo-Olu’s promise to exploring local capacity in providing solutions to various challenges in the state.

The six routes the boats will principally be plying include Ikorodu to Falomo; Ikorodu to Ebute Ero and Marina; Ebute Ojo to Ijegun Egba, Apapa and Marina; Bayeku to Oke Ira Nla and Falomo; Mile 2 to Marina, and Badore to Ijede.

The launch of the speed boats, which will be operated by the Lagos Ferry Services (LAGFERRY), effectively marked the commencement of commercial operations in waterways transportation by LAGFERRY. In addition to the boats, a mobile application designed to facilitate easy access to water transportation services was also launched.

Without a doubt, the intervention represents a remarkable way forward in the Sanwo-Olu administration’s strategy to deliver an effective and integrated inter-modal transportation system in addressing the perennial issue of traffic congestion on the roads.

Consequently, the narrative of transportation in Lagos is about to change for good, as the state is set to completely take advantage of the water bodies to decongest the roads and substantially reduce travel time for commuters. The commencement of commercial operations on waterways would certainly promote a healthy living and restore aesthetics of environment through reduction of carbon emission.

In-spite of this latest development, it is cheering to state that the state government is not resting on its oars as it is poised to embark on the construction of more jetties and provision of more modern ferry boats to create opportunities for more private sector participation in water transportation.

The state government is equally ready to drive full compliance on measures put in place to ensure the safety of commuters using the waterways. To this end, the Lagos State Waterways Authority (LASWA) is currently being strengthened to effectively discharge its monitoring and regulatory duties in line with best practice.

The state government is also set to spread the efficiency of the LAGFERRY services to meet the demand of the people at various times of the day. Plans are currently in top gear to double the capacity in the LAGFERRY’s fleet from 14 to 30 boats before the end of the year. This is to enable the agency efficiently discharge its mandate to ease the movement of Lagosians from various parts of the city to another through the waterways.

There are equally plans to build modern jetties in Badagry, Lekki, and Ajegunle, just as the one being built in Ijegun would soon be completed. Also, before the fourth quarter of the year, LAGFERRY would extend its services to all 40 water routes licensed for Lagos.

It is, however, important to stress that while the state government is creatively spearheading investment into water transportation in the state, more private investors with interest in the sector are still required to partner with government in order to fully optimize the numerous potentials that abound in the sector.

On its part, the state government is ever willing to embrace more creative and strategic initiatives geared towards improving the unlimited potentials of the state’s waterways.

On a final note, it must be stressed that the waterways stretching from Badagry to Epe, (with a Peninsular in between, a lagoon at the back and the Atlantic in front), Ikorodu to Marina, and Badagry to Marina, among others, are nature’s gifts to Lagos State.

These are coastlines that many societies fervently wish they had, because they are natural habitats that are yet to be subjected to devastation, global warming, climate change and other environmental hazards.

It is, thus, very crucial that these waterways are kept safe and secure for the use of all stakeholders. Nothing must be done to jeopardize their safety and purity. Injurious activities such as illegal sand mining and dredging, pollution of the water body through diverse unwholesome practices, among others, should be discouraged in its entirety.

In a world that is being confronted with serious environmental threats from Cape to Cairo and Beijing to Melbourne, it is important that all stakeholders join hands to ensure that Lagos waterways are kept clean, safe and secure. It is in doing this that the much-sought prosperity from the sector could be truly guaranteed.

Ogunbiyi is of the Ministry of Information & Strategy, Alausa, Ikeja