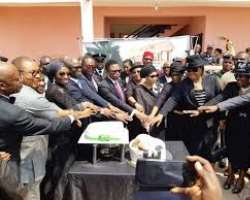 It is yet an additional notch in the preponderant feats that underpin the remarkable and memorable years of Chief Willie Obiano’s government. A core institutional growth whose relevance outlives the administration that thoughtfully engendered it, the domiciliation of the Federal Court of Appeal in Awka, 29 long years after Anambra State was created, is both ennobling and gratifying to ndi-Anambra and to all who seek expanded reach of the elevated faculty of legal inquiries provided by the appellate court, pursuant to the entrenchment of man’s right to be vindicated in a democracy such as Nigeria’s.

And for 29 years, the people and government of Anambra State, including other organizations in the state, were constrained to seek justice in the Appellate Court in Enugu. “Why it the Federal Court of appeal just happening in Anambra State capital city of Awka?,” one might ask. Does Awka now have greater need for the Federal Court of Appeal than it had in the years gone by, or have ndi-Anambra’s attendance of the appellate court sections in Enugu been thoroughly faulted in recent times? Indeed, no registerable variation exists in the necessity in the past and the present for a proximate appellate court for Anambra people. The sustained absence of the judicial institution in Awka was probably borne out of sheer disregard of past Anambra governments of the burden that became ndi-Anambra’s attending court in Enugu; or the situation endured as a result of past State Governments’ inadequacies in planning and executing the soothing feat Chief Willie Obiano’s administration so finely contrived and delivered.

Today, the Appeal Court gracefully seats in Awka. This development elevates the status of Anambra State in the judicial circle across the country; it increases Federal presence in Anambra geopolitical space. It saves ndi-Anambra and their lawyers so much fund and risks upon frequent journeys along the failed Federal roads that lead to Enugu from Anambra State.

Governor Willie Obiano’s successful bargain in locating the Court of Appeal in Awka speaks volume of the governor’s peerless quotient in strategic thinking. He has demonstrated this in the exemplary security architecture he has institutionalised in Anambra State under “Operation Kpochapu 1” and “Operation Kpochapu 2” whereupon state of the art ICT-inclined security installations are deployed for effective surveillance and crime detection. The success of the scheme has restored sanity and freedom to Anambra from the wanton criminality that previously tormented the people. For this unprecedented feat, Governor Obiano has continued to win laurels as a choice security ambassador in Nigeria and across the globe.

Governor Obiano had deployed this same acumen for strategic thinking in his administration’s institutionalization of agencies that oversee his scheme for vast and sustainable agricultural and industrial ventures in Anambra. Agencies like Anambra State Investment Promotion and Protection Agency, ANSIPPA; Anambra Small Business Agency, ASBA; and Awka Capital Territory Development Authority, ACTDA, for example, facilitate and supervise investments coming into the state, assist in raising the capital base of investments, and regulate development pattern in the capital territory respectively. These and other statutory bodies like Anambra State Physical Planning Board, Operation Clean and Healthy Anambra (OCHA Brigade), Anambra Traffic Management Agency (ATMA), Anambra State Health Insurance Agency (ASHIA) combine with the Government Ministries to give Obiano’s administration a functional organic character that continues to impress the features of good governance in Anambra State.

Chief Obiano’s right choice of respected legal luminaries in the persons of Onyechi Ikpeazu (SAN), Emeka Etiaba (SAN), Dr. Uju Nwogu (Attorney General and Honourable Commissioner for Justice, Anambra State) among other cerebral persons in the committee that birthed the Federal Appeal Court in Awka represents the latest expression of his fair mindedness and ingenuity in seeking the good of Anambra State and her people. Governor Willie Obiano does not cease to consider gross public good in deploying resources to attain set targets. The Federal Court of Appeal today comfortably seating in Awka is surely a mark of distinction for Gov. Willie Obiano in the class of Anambra State governors over time.