- As Barr. Nwaopara, Ajih hail Governor's decision, say it's victory for Rule of Law
By The Nigeria Voice 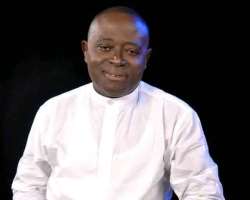 Nwosu's reinstatement was contained in a letter addressed to him by the Head of Service with the reference no: SGI/S.0082/V/T.2/181 dated 29the January, 2020, where Governor Uzodinma granted him waiver to complete his tenure of office, which elapses in the month of June, 2020.

Recall that Osita was unlawfully asked to proceed on retirement by the former administration, paying no attention to the provisions of the extant laws governing the appointment and retirement of an Auditor General.

Reacting to Governor Uzodinma's decision, an Owerri based renowned activist lawyer, Barr. Iyk Nwaopara has commended Governor Hope Uzodinma for choosing to thread the path of honour by formally reinstating Barr. Osita Nwosu as the Auditor General, Local Government Areas, Imo State, describing it as expected for any democrat.

Nwaopara described the reported vacuum created by those who chose not to do the right thing as disdainful and embarrassing to the state.

His words: "Senator Hope Uzodinma having done justice to the vexatious issue of who the Auditor General was after Barr. Nwosu was unlawfully directed to proceed on retirement when he was not due, I must commend him for adhering to Rule of Law.

"What was more curious to outsiders was the reinstatement of a man who had retired from service since 2016. That aspect I believe government should look into it."

In the same vein, Mr. Emeka Ajih, a businessman turned politician has also hailed Uzodinma's decision to reinstate Barr. Nwosu to serve out his tenure, which is to end in less than six months time.

"I pray that those in the service should always advise politicians appropriately because whatever bad precedence you set today for self serving benefits might be used to judge the person tomorrow. I salute our present Governor for choosing to Wright the wrongs by granting the Auditor General waiver to serve out his tenure. I believe that posterity will remember him well for giving room for justice, equity and fair play", he stated.

When newsmen asked Barr. Nwosu to respond to the development, he simply said: I am grateful to His Excellency, the Governor of Imo State, Senator Hope Uzodinma for his magnanimity and good sense of discernment and judgement. As for those behind my ordeal, I bear no grudge. I have forgiven everyone.