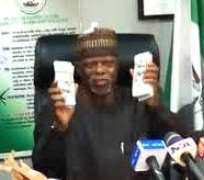 Men of the Nigerian Customs Service have seized $8,065,615 in cash at the Murtala Muhammed International Airport in Lagos. The money was seized on 16 January.

The cash kept inside envelopes with the names of the would-be-owners, was being transferred into a plane, from a vehicle driven by a man working with the Nigerian Aviation Handling Company, NAHCO.

Customs Comptroller-General Hameed Ali told journalists in Lagos on Tuesday, the cash was intercepted while it was about to be loaded into an aircraft from the vehicle. He did not provide details of the aircraft. However, he identified the driver who was arrested as Chimezie Okonkwo.

Ali said the Customs would eventually unravel the identity of the owners of the abandoned money.

“From the day we seized this money, no bank has come to claim ownership. But our investigation will reveal the mystery behind the owners,” Ali said.

Ali citing credible information, said the command’s operatives at about 1200 hrs on Jan. 16 intercepted illegal movement of foreign currency at the ‘E’ wing of the Tarmac.

He said that on Jan 18, an inventory of the consignment was taken, and was witnessed by representatives of the Directorate of State Security, Customs Intelligence Unit, Anti-Money Laundering and Counter Terrorism Financing Unit, Customs Police and the suspect.

He added that at the end of the inventory taking, a total number of 20 sealed wraps were opened, counted, re-sealed and re-wrapped under Video coverage from the beginning of the exercise to the end.

He pointed that the total money intercepted stood at $8,065, 612 (Eight Million, Sixty-Five amount in Thousand, Six hundred and twelve Dollars only).

Ali said that the consignment remains in safe custody, while preliminary investigations had commenced on the seizure, adding that the media would be updated as the investigations unfold.

He appealed to Nigerian travellers and those in business to declare any cash with them if they chose to carry such, adding that the threshold still remains $10,000

“We all know that countries of the world prosper through international trade. The era of globalisation has brought about an explosion in the exchange of goods and services across our borders.

“Its complexities and time sensitiveness has led to developments in the international financial system that guarantee safe, secured and fast cross border platforms for payment of goods and services.

“While provisions are made for various forms of international electronic transfers, exceptions are made for those who prefer to travel across borders with cash and other monetary instruments.

“When this option is used, those who carry physical cash across the borders are obliged by law to make declaration of such movement once the value is above the approved threshold,” he said.

He pointed that currently the value of the threshold in Nigeria was the equivalent of $10,000 and above.

He therefore said that all travellers in and out of Nigeria, must declare any physical cash in excess of this threshold of $10,000 or equivalent of other currencies or monetary instruments.