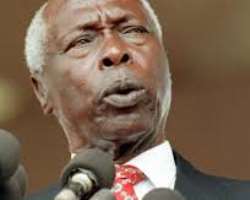 Daniel Moi is dead. He died early morning of 4th February 2020. His day of death came after 18 years from the day he had finished ruling Kenya for twenty four years. He took over from Jomo Kenyatta in 1978.His 24 years of reign as the President of Kenya, is full of ripples. The political experience for the people of East Africa have no any other memory other than that which leaves no otherwise but to have his legacy loom as immortal memories of iron fisted rule, political brutality, firm implementation of punitive policy, corruption, patriarchy, tribalism, exclusion,impugnity and gestapo statehood as well as police-state culture in mainstream politics.

The best way to mourn Moi is to remember him as a politician, especially in terms of his decision making and political statements, and how he dealt with the opponents by using the fierce police machinery. Moi boldly excluded the tribal otherness in dishing out favours. It is ok, some of us forgave Moi’s panicky political psychology due to his previous sad experience of almost getting thrown out of power through a 1982 coup d’état attempt , but his hand of terror went beyond those that perpetrated the coup against him. The intellectual class and the Universities are suffered most by meeting with the fateful panicking hand of Moi. Moi subjected all the Universities to be reporting to Ezekiel Barang’etuny, an illiterate Moi tribe’s man, Bareng’etuny was also chairman of KANU. A political party in power by that time. It was this time that Most of Universities lost their academic staffs to Kamiti Maximum prison. I mean, during Moi’s time the department of detention without trial at Kamiti Maximum Prison had a highest number of lecturers and students as inmates than the University of Nairobi. Any lecturer or student that was hiding Karl Marx in his bedroom was simply taken to Kamiti for indefinite detention, imprisonment or sometimes death like the one Steven Adongosi.

Moi did not like long schooling that took many years, he did away with the form five and form six system of high school, only to replace it with a short timed system known as 844, a system that could produce carpenters, metal workers, cobblers, painters, small scale farmers, but not useless professors with useless English in the likes of Mazrui, Anyang Nyong, Ngugi and other scholars with radical thought who only knew politics in the books but not practical politics of managing the state to achieve economic development.

Moi did not want any to start cheap competition against him, this was publicly realized when he went on a trip to the USA along with the Illustrious Foreign Affairs Minister, the one John Robert Ouko. When Moi was unable to understand and answer the questions from the American media due to the American deep accent in the spoken English, then the fairly educated and exposed Robert Ouko tried to out-shine the master by pretending to be stepping in to help the President to answer the questions posed by the American media, but Ouko did it with very sharp intellectual flare that bamboozled the journalist ten-nil and the Journalist began addressing Ouko as ‘Mr President.’ Moi was offended, Ouko died two days later after getting back to Kenya, but he died mysteriously.

As young school children in the 90’s, Moi distributed free school milk, on the packaging of the milk there was a slogan of Nyayo Philosophy; LOVE PEACE AND UNITY. But there was also verbal pledge we were trained to sing every time we were taking the milk; ‘we the school children of Kenya, we do drink the milk of Nyayo so that we cannot be affected by pellagra, scurvies and kwashiorkor like the poor children of Uganda’. This was also under the light of praise songs to Moi’s government. Songs like DAWALA KENYA MOI-Moi reign Kenya forever. Moi was not liberal about feminism, according to him women like Wangari wa Mathai was active in environmental politics because their blood was boiling hot due to lack of a husband. He advised her to look for a husband so that she could have her blood to be cooled. The most excluded communities during Moi’s time were Luo’s, Bukusu and Gikuyu.He used the state machinery to create a national mentality that Gikuyu’s are thieves, Luo’s are not circumcised and Bukusu’s are like the Bagishu of Uganda and hence they don’t qualify to produce a person that can serve a president of Kenya. The Bukusu people make their serious speech through swearing by circumcision, they use the word ‘Bakheba’. On the inception of mult-party politics the Bukusu used to swear in public that ‘Bakheba’ we shall never vote for Moi, then Moi told them go and eat their ‘Bakheba’- this was the time all the factories, public institutions, schools, school milk, seeds for planting were withheld from Bungoma district to frustrate the society with poverty and hunger into submission.unfrotunately, The Bukusu never submit instead they advanced into organized resistance movement known as February Eighteenth revolutionary Army (FERA), it was led by Brigadier Odongo and Patrick Wangamati.

Moi also had very many good agenda for Kenya and Africa. Most notable among them were ; Family planning campaign, afforestation campaign which had a philosophy that when you cut one tree plant two at the same spot, prevention of soil erosion, and Maendeleo ya Wanawake (development of women, but not empowerment of women).Moi had zero tolerance to Alcohol, the police were allowed to swop and violently arrest illicit beer sellers. About drug traffickers, he told them that if they are men enough, let them then go and sell cocaine and opium to their own sons but not sons of their neighbours. That is why one school headmaster who had kept bushy hair and beards was suspected to be eating grass was shaved in public by the KANU youth-wingers through the command of the regional office of the president.

But, Moi did not like good network of well tarmacked roads, freedom of the media, freedom of assembly, as well as to walk around without a cockerel rubber stamp in the KANU Membership card. During Moi’s time the only road without pot-holes was the road between Nakuru town and Kabarak town where his village home was. During this time it was so difficult to travel across Kenya. Security was good, more than 90% of the District commissioners, District officers, Police men, provincial commissioners and postal workers were from Moi’s clan. The security reinforced loyalty to the party by having citizens to sing in public Jogoo! Jogoo! Nyayo ju! But, the postal clerks were required to open and read all the letters before sending them to the recipient. I stopped here, but I will mourn Moi for a long time.